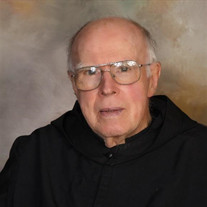 Hugh Francis Clarke was born in Newark, NJ, June 21, 1930 to Patrick Clarke, born in Co. Cavan, Ireland, and Catherine Carolan, born in Hamilton, Scotland. Abbot Brian was pre-deceased by his parents, and siblings, Catherine (Gillespie), Raymond and James. Innumerable nieces, nephews, cousins, and great nieces and nephews survive him, including his sister-in-law, Lorraine Clarke. Hugh attended St. Peter’s Grammar School, Newark, graduating in 1945, and matriculated to St. Benedict’s Prep, also in Newark, graduating in 1949. After novitiate from 1951-1952 at St. Benedict’s Abbey, Atchison, Ks., Hugh professed simple vows, September 8, 1952, and became known as Brian. Frater Brian received a Bachelor of Arts degree from St. Vincent College, Latrobe, Pa., in 1954, and undertook theological studies at St. Mary’s School of Theology, at Delbarton in Morristown. On May 31, 1958. Fr. Brian completed a Master of Arts degree in English at Seton Hall University, South Orange, in 1967. In 1954, Fr. Brian began his long career of teaching, at both Delbarton School, Morristown, and St. Benedict’s Prep, Newark. He taught Latin, Modern History, Religious Studies and English. In the 1960s, Fr. Brian also undertook fulltime parochial ministry at St. Benedict’s Church, Newark, and Sacred Heart Church, Wilmington, Del., both staffed at the time by St. Mary’s Abbey. In 1967, Fr. Brian was appointed novice master, and prior in 1971. On June 13, 1975, the chapter of St. Mary’s Abbey elected Fr. Brian as their seventh abbot. Abbot Brian served as abbot for twenty years, submitting his resignation at the age of sixty-five, according the Constitution at the time. Following the fall of Saigon in 1975, waves of immigrants even made their way as far east as Pennsylvania and New Jersey. The United States Army at Fort Indiantown Gap contacted Abbot Brian. Among the group who were given temporary housing at St Mary’s Abbey was a monk from a monastery closed by the North Vietnamese. Br. Tarcisius eventually transferred his vow of stability to St. Mary’s Abbey. In the ensuing year or two the monastery sponsored some seventeen refugees and was active in helping numerous others to get placed in homes and jobs. In 1980, the USCCB honored Abbot Brian with their humanitarian award for his work with Vietnamese refugees. In 1996, following his resignation in 1995 as abbot. Fr. Brian enjoyed a year sabbatical in Dublin, Ireland, and in Israel. Until a few years ago, Abbot Brian enjoyed part-time teaching and weekend assistance at Christ the King, New Vernon, and St. James, Basking Ridge, and chaplaincy work at the Carmelite Monastery, Morristown. Abbot Brian moderated for many years the Delbarton Parents of Graduates Association. He was an ever-present fan of sports on campus, especially baseball and basketball. His passion for the abbey orchard never wavered. This facet of his life began in the 1950s. Generations of postulants, novices and juniors enjoyed the colorful autumn days with Abbot Brian harvesting (and eating) apples. The monks continue to enjoy apples from trees Abbot Brian lovingly cultivated for decades. In lieu of flowers, donations in Abbot Brian’s memory to support the abbey capital improvements health care of the monks or abbey endowment may be made using the following link: https://www.saintmarysabbey.org/support-us.

The family of ABBOT BRIAN HUGH CLARKE, OSB created this Life Tributes page to make it easy to share your memories.