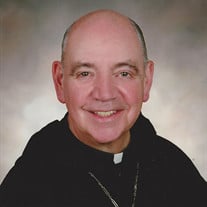 The community of St. Mary’s Abbey announces with sorrow the passing of the Right Reverend Abbot Giles (Peter) Hayes, O.S.B, on March 7, 2018, in the seventy-ninth year of his life and the fifty-ninth of monastic profession. He entered eternal rest to join his brother Michael, and is survived by brothers Gerald and Henry, and sister, Sr. Mary Hayes, S.N.D. Peter was born on February 27th, 1939 in Newark, New Jersey to the late Florence Auth and Dr. Gerald Hayes, M.D. He was educated at Our Lady of the Most Blessed Sacrament School and Delbarton School, from which he graduated in 1956. He attended St. Vincent’s College (Latrobe, PA) and St. John’s University (Collegeville, MN), where he received his Bachelor of Arts in Philosophy. He professed monastic vows to the Order of St. Benedict at St. Mary’s Abbey in Atchison Kansas on July 11th, 1959. He received seminary training from both St. John’s and St. Mary’s, and was ordained to the priesthood on May 29th, 1965. He did postgraduate studies at Catholic University, Seton Hall University, Rutgers University, and Princeton Theological Seminary, and received an honorary doctorate from Georgetown University in 1987. Father Giles served in many positions at Delbarton School: coach, dean, guidance counselor, teacher, and two terms as Headmaster, from 1980-1985 and 1996-2000. As Headmaster, he attended as many athletic events, concerts, and plays as he could. On March 8th, 2006, he was elected and confirmed as the tenth abbot of St. Mary’s Abbey, and was blessed on June 10th, 2006, serving until March 8th, 2014. As Abbot, he sought to enhance the prayer life and observance of the community, setting the example by his presence at every hour of Divine Office and common table. In his frequent conferences to the community, he emphasized the practice of lectio divina—the prayerful reading of scripture—for every member of the community. He also oversaw the agreement between St. Mary’s Abbey and the Trust for Public Lands to convey part of the abbey property to the Morris County Park Commission. Delbarton facilities were also greatly improved during his tenure, most notably the Fine Arts Center and athletic fields. Abbot Giles’ parochial ministry included time at St. Joseph’s Church in High Bridge, St. Joseph’s Church in Mendham, St. Margaret’s Church in Morristown, and St. Elizabeth’s Church in Wyckoff. He served on the Executive Board of the Conference of Major Superiors of Men—the canonically recognized pontifical conference organized to promote the welfare of all religious priests, brothers, and candidates in the United States—from 2006 to 2013, acting as President in 2012-2013. He also performed local community service with the Morris County Urban League, MORHELP, and Morris County Fair Housing, among others. During his nearly seventy year involvement with Delbarton School as a student and monk, one of the things he often talked about being proud of was the work of the Delbarton Appalachian Program. From 1980 through 2014, he did part-time work in the coal mining regions of Kentucky among the poorest of the poor of Floyd, Magoffin, and Lee Counties in the Eastern Kentucky Mountains. For nearly 35 years, during periods of one week to one month, he and a number of St. Mary’s Abbey confreres, Delbarton faculty, at least 50 Delbarton parents and more than 1,000 Delbarton students experienced what he called “this wonderful mission of total emergence” in the region, delivering truckloads of donations and ministering to citizens of the area. He was a avid writer, from producing articles and essays for outlets like the American Benedictine Review, New York Historical Review, and Give Us This Day. He also wrote a book—Unto Another Generation: St. Mary’s Abbey/Delbarton, 1836-1990, a History—published by Newark Abbey Press in 2006. He enjoyed keeping correspondences with many people, estimating he wrote around one thousand letters per year. As Headmaster, he began the practice of writing birthday cards for every single student. He was known to the St. Mary’s Abbey and Delbarton community as a person who was always the first to affirm, compliment, and encourage others, personifying the teaching of St. Benedict: be the first to show respect to the others (RB 72:4). He always had a kind word for everyone. Abbot Giles was also a lover of aphorisms, often having them printed on cards to give out to students, with sayings like “The other guy first.” Abbot Giles is perhaps best summed up by a short piece from Thomas G. Ferguson Associates, Inc., written in celebration of the dedication of one of their conference rooms to him: "With his unselfish humanity and his deep, abiding spirituality, Fr. Giles is truly a man for all seasons...He is an inspired leader, a selfless worker, a compassionate friend, and an obedient member of the Benedictine Order. His leadership arises from—and is sustained by—a deep understanding of the needs of those whom he serves. He encourages people to discover for themselves the importance of personal growth and development. And he challenges them to extend their God-given talents to the fullest. An astute and effective administrator, Fr. Giles handles his secular responsibilities with diligence, sophistication, and acuity. Yet he never loses sight of what is truly important and what Life’s real priorities are. During a crisis of health or of spirit, Fr. Giles’ ready smile, open and fertile mind, and generous heart can always be relied upon for strength and support. He has a quiet courage of his faith, and the remarkable ability to bring hope into the lives of all those he touches. His exceptional ability to teach and lead—with tenderness and compassion—and his extraordinary capacity to love and serve are qualities that do honor to Fr. Giles, his community, and those of us who are fortunate enough to be his friends." Abbot Giles will be honored with his friend Mr. Thomas G. Ferguson, Chairman Emeritus of the Delbarton School Lay Board of Trustees from 1992-1998, at the Second Annual Abbot’s Table on Wednesday, May 16th, 2018 at the Hanover Marriott in Parsippany. In lieu of flowers, please send memorial gifts in honor of Abbot Giles to the St. Mary’s Abbey Infirmary Fund.

The community of St. Mary&#8217;s Abbey announces with sorrow the passing of the Right Reverend Abbot Giles (Peter) Hayes, O.S.B, on March 7, 2018, in the seventy-ninth year of his life and the fifty-ninth of monastic profession. He entered... View Obituary & Service Information

The family of ABBOT GILES PETER HAYES, O.S.B. created this Life Tributes page to make it easy to share your memories.

The community of St. Mary’s Abbey announces with sorrow the passing...