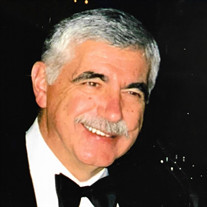 Anthony Caputo, a warm, kind and generous man, who touched many lives, passed away Friday evening, September 11, 2020 at Morristown Medical Center, surrounded by his loving Wife and children. He was 86. Born and raised in Brooklyn, NY before becoming a long time NJ resident. He resided in Mt. Arlington with his wife Jacqueline since 2007. Anthony had served in the United States Air Force during the Korean War stationed in Japan as a radio & communications specialist, before being honorably discharged in 1956. He worked as a contract engineer, he had been employed with All-Tech USA for many years. He loved his work and although formally retiring in 2018, he still continued to share his expertise consulting whenever the opportunity presented itself. Anthony and his wife, Jacqueline had also owned "Porky's a Place for Ribs" in Byram, NJ for many years where his passion for food and people brought joy to many. He was a member of the B.P.O.E. Elks Club of Mount Arlington, and Carmine's Wine Club where he made several wines that won gold medals at the Westchester Wine competition. Anthony was preceded in death by his parents, Antonio Caputo and Rose (Libertini) Caputo; and his brother, Roy Caputo. Survivors include his loving wife of 43 years, Jacqueline (nee Appice) Caputo; his children, Thomas A. Caputo of Idaho, and Rosanne S. Carr and her husband Thomas of Pennsylvania; Elena Visceglia of Mount Arlington, and Joseph N. Visceglia of Lodi; a sister-in-law, Enza Caputo of Marlboro; and five grandchildren, Max Caputo, Sarah Carr, Thomas Carr, and Michael and Rocco Bonovolanta. Also his Yorkie Luca who he adored. In lieu of flowers, the family would be grateful for memorial gifts to the Leukemia & Lymphoma Society (donate.lls.org) or the Cold Nose Warm Heart Dog Rescue in Succasunna NJ (coldnosewarmheart.org)

Anthony Caputo, a warm, kind and generous man, who touched many lives, passed away Friday evening, September 11, 2020 at Morristown Medical Center, surrounded by his loving Wife and children. He was 86. Born and raised in Brooklyn, NY before... View Obituary & Service Information

The family of ANTHONY CAPUTO created this Life Tributes page to make it easy to share your memories.

Anthony Caputo, a warm, kind and generous man, who touched many...

Send flowers to the CAPUTO family.