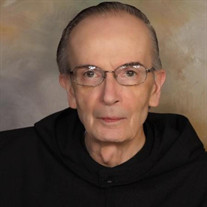 Michael Peter Hunt was born July 17, 1943 to Mary (née Hughes) and Dr. Thomas Hunt, in Elizabeth, NJ, the second of four children. Michael was baptized at Sacred Heart Church, August 15, 1943, by his uncle, Fr. Roderick Hunt, C.P. Michael grew up in a parish staffed by the Benedictine monks of St. Mary's Abbey, where, no doubt, the seeds for his monastic vocation were sown. Michael attended Bender Memorial Academy, Elizabeth, staffed by the Benedictine Sisters of St. Walburga Monastery, and graduated in 1957. For secondary school, Michael enrolled at St. Benedict's Preparatory School, Newark, from which he graduated in 1961. After graduation from high school, Michael spent his first two years of college at St. John's University, Collegeville, Minn. as a candidate for the priesthood for St. Mary's Abbey, Morristown, New Jersey. He entered the novitiate at St. Benedict's Abbey, Atchison, Kansas. A year later, he professed simple vows, on July 11, 1964, receiving the religious name Jonathan. Br. Jonathan completed his college education at St. Benedict's College, Atchison, graduating in 1966 with a Bachelor of Arts Degree in Philosophy. Br. Jonathan began his theological studies at St. Mary's School of Theology for the next three years, and completed these studies at St. John's Abbey, Collegeville, Minnesota, and St. Vincent Seminary, Latrobe, Pennsylvania. He earned a Master of Arts in Theology, and was ordained deacon at St. Mary's Abbey, Morristown, May 24, 1979. While teaching English at Delbarton School, Br. Jonathan received a Master of Arts degree in English from Seton Hall University, South Orange, NJ. Always an excellent student, Br. Jonathan would pursue his passion for Sacred Scripture by taking summer courses in the Old and New Testaments, and the Hebrew language at Seton Hall. In the fall 1973, Br. Jonathan began a long career teaching at Delbarton School, Morristown. At various times, Br. Jonathan taught English, Latin and in the Religious Studies departments. Most recently, he had been teaching the youngest members of the school, the seventh graders, in a class on the introduction to the Bible. Br. Jonathan approached this with great passion. He loved the Word of God! His class notes were meticulously handwritten and filled numerous spiral notebooks. Br. Jonathan approached all he did meticulously. He even savored every morsel of food. He was especially fond of potato chips and Coca-Cola! For years, Br. Jonathan served in the abbey as lead cantor. God blessed him with an angelic voice. As a deacon, he was particularly serious about his singing of the Exsultet at the Easter Vigil. And he practiced it with determination. As a lover of Scripture, which he studied throughout his life, he proclaimed it devoutly and with conviction. Even as his physical health deteriorated and necessitated his moving to the infirmary, he insisted on attending the Office as often as he could. Although wheelchair-bound, he continued to attend the Sunday liturgy almost to the end of his life. Due to his declining health, it was with great sadness that Br. Jonathan had to give up many of his most cherished pursuits, especially teaching. He is long-remembered as a teacher who loved and nurtured his students. One alum from Br. Jonathan's early days as a teacher, commented, after hearing of his former mentor’s death: “He introduced me to a world of literature that I never knew existed (no, not as a jaded senior...but as a 7th grader full of wonder)!” It is no secret that Br. Jonathan struggled for years with depression, which at times restricted his activity. This caused him not a little frustration. Yet, Br. Jonathan was determined to do his best and forged ahead. Books were a great boon to him in the more sedentary years towards the end of his life. His confreres know well how much Br. Jonathan treasured books. His confreres also know that he read them all, and had an incredible memory! Like the monks of old, Br. Jonathan studied much throughout his life. In 2004, Br. Jonathan celebrated his fortieth anniversary of vows. At the community’s annual jubilee liturgy, Abbot Thomas Confroy said: “Br. Jonathan’s love of the Word has drawn him more deeply into a careful study of the Scriptures, which he shares with his students at Delbarton. Among his many talents, God has given Br. Jonathan a beautiful singing voice, which he uses most effectively to help us all to ‘psallite sapienter’, to sing the psalms wisely, and enhance the monastic liturgy.” May Br. Jonathan now be singing the psalms and dancing with the angels! His parents, Mary and Thomas, and an older brother, Thomas Jr., predeceased Br. Jonathan. In addition to his monastic family, Br. Jonathan is survived by his sister, Margaret A. Vyssotsky of Orleans, Mass., and his brother, Donald R. Hunt and his wife, Ana (Chaviano) Hunt of Hillside, NJ, and his two nieces, Melissa Hunt Daly (Ryan), Jersey City, NJ, and Meghan Jordan (Thomas) of West Union, Iowa, and their children, Theodore and Eleanor Jordan and Sloan Daly. Due to the coronavirus pandemic, Br. Jonathan's obsequies will be celebrated privately. His body will be received at the abbey church on Monday afternoon, May 4. The Office of the Dead will be sung later that evening at 6:45 p.m. The Funeral Mass (live-streamed) and interment in the abbey cemetery will be celebrated Tuesday, May 5, at 4:30 p.m. Donations in Br. Jonathan's memory to support abbey capital improvements, health care of the monks or abbey endowment may be made using the following link: https://www.saintmarysabbey.org/support-us. Abbot Richard and the monks of St. Mary's Abbey request the customary suffrages for our confrere, Br. Jonathan. Abbot Richard Cronin, O.S.B. & the monks of St. Mary’s Abbey

The family of BROTHER JONATHAN M. HUNT, OSB created this Life Tributes page to make it easy to share your memories.