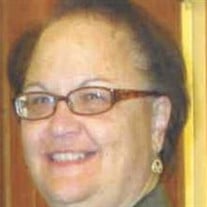 Sister Diane Collesano, 61, a Sister of Charity of Saint Elizabeth, died Thursday, May 25, 2017 at St. Barnabas Medical Center, Livingston, NJ. Sister Diane was born in Hackensack, New Jersey, the daughter of Julian and Josephine (Chipolone) Collesano. She entered the Sisters of Charity on August 15, 1978 and was a member for 38 years. Sister Diane graduated from the College of Saint Elizabeth, Convent Station with a B.A. Degree in Elementary Education; from St. Peter’s College, Jersey City with an M.A. degree in Administration/Supervision; and from the College of Saint Elizabeth with an M.A. in Theology. Sister Diane did doctoral work in Sacramental Theology at Duquesne University, Pittsburgh, PA. Sister Diane was an Educator in elementary and secondary schools in New Jersey. She taught at Our Lady of Mount Carmel, Ridgewood; St. Mary High School, Jersey City; and the Academy of Saint Elizabeth, Convent Station. She served as Principal in St. Paul, Clifton, the Academy of the Sacred Heart, Hoboken, and Marylawn of the Oranges, South Orange. In 2008, she became an Instructor of Theology at the College of Saint Elizabeth. She was a dynamic professor whose love for her subject and students was evident by the respect they exhibited for her. A colleague stated “Sister Diane always presented the mind of the Church and opposing views with nuance and respect.” In addition to her college courses, Sister Diane taught in the Deacon Formation Program of the Metuchen Diocese, was presenter on theological and spiritual topics at many parishes and with various congregations of women religious throughout the tristate area. She was active in the Sisters of Charity Federation and taught in the Intercommunity Novitiate program in Philadelphia, PA. Since her high school years, Sister Diane was an active member of the world wide Focolare Movement. Her participation and commitment to this group continued to the present. She was predeceased by her mother Josephine Collesano. She is survived by the Sisters of Charity; her father Julian Collesano and Freda Brett, extended family members, and many companions in the Focolare Movement. In lieu of flowers, it is requested that contributions be made to the Sisters of Charity Development Fund, P.O. Box 476, Convent Station, NJ, 07961-0476.

The family of SISTER DIANE COLLESANO created this Life Tributes page to make it easy to share your memories.

Sister Diane Collesano, 61, a Sister of Charity of Saint Elizabeth,...

Send flowers to the COLLESANO family.