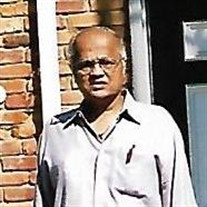 Dilip Jamnadas Shah passed away Tuesday morning, August 7, 2018 at the Valley Hospital in Ridgewood following an extended illness. He was 71. Born in Mumbai, India, Mr. Shah immigrated to the United States in 1971, settling in Queens, NY. He... View Obituary & Service Information

The family of DILIP J. SHAH created this Life Tributes page to make it easy to share your memories.

Send flowers to the SHAH family.