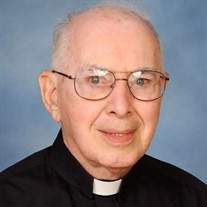 Francis Roy Reilly was born July 3, 1930 to Anna (née Peters) and Francis Reilly, in Elizabeth, NJ. Francis was baptized at the Church of Blessed Sacrament, July 20, 1930, by Fr. Anthony Goebel, O.S.B., a monk of St. Mary's Abbey. Francis grew up in a parish staffed by the Benedictine monks of St. Mary's Abbey, where his monastic vocation was fostered. Francis was the older brother to Adel. Francis graduated from Blessed Sacrament School in 1944, and was enrolled at St. Benedict's Preparatory School, Newark, from which he graduated in 1948. After acceptance as a candidate for the monastic life at St. Mary's Abbey in 1948, Francis completed two years of college at St. Vincent Minor Seminary, Latrobe, Pennsylvania, and was sent in 1952, as was the custom, to St. Benedict's Abbey, Atchison, Kansas, for his novitiate. He also did coursework at the Benedictine Mission Seminary at St. Paul's Abbey, Newton, NJ. After profession, July 11, 1953, Frater Rembert, as he would henceforth be known, returned to St. Vincent to complete his college education. In 1956, Frater Rembert received a Bachelor of Arts degree. Frater Rembert completed his theological studies at the St. Mary's School of Theology, Morristown, and was ordained priest, May 23, 1959, at the Cathedral of St. John the Baptist, Paterson, NJ. On May 31, 1959, Fr. Rembert celebrated his First Mass at his home parish, Blessed Sacrament, Elizabeth, NJ. Since 1955 as a young monk, Fr. Rembert worked faithfully and tirelessly at Delbarton School, Morristown, as teacher, dorm prefect, business manager, and vice president for development. After his ordination, Fr. Rembert also did summer coursework at Seton Hall University, South Orange, NJ in guidance, in 1961, and at the University of Notre Dame, South Bend, Indiana in accounting, in 1966. Until very recently Fr. Rembert continued to be a devoted presence in the school's development office. During his many decades working in the school, Fr. Rembert rarely missed an alumni gathering, and was often sought out by alumni who stretch across many decades. For many years, too, Fr. Rembert was the moderator of the Fathers and Friends of Delbarton. In the abbey, Fr. Rembert served as assistant treasurer and treasurer from 1966 to 1995. He served as a weekend assistant in the following parishes in New Jersey: Notre Dame of Mt. Carmel, Cedar Knolls, administered until a few years ago by St. Mary's Abbey, St. Elizabeth of Hungary, Carteret, and St. Aloysius, Jackson, until a few years ago. Fr Rembert also served as one of the chaplains at the many local convents of Sisters served by the abbey. To his confreres, Fr. Rembert will always be known as a faithful monk, often one of the first to arrive in choir for the Divine Office and the daily Conventual Mass. Fr. Rembert, for much of his priesthood, celebrated Mass privately every day, at which he was nourished and sustained by the Body and Blood of Christ. He was a wise counselor known for his historic memory when the chapter or the council of seniors was discussing a particular matter. Fr. Rembert has been for all of us for more than sixty years one of those monks who could always be found here at Delbarton. His confreres and alums will sorely miss his frank presence. One usually knew exactly where Fr. Rembert stood on a particular issue. In recent years, Fr. Rembert's health slowed him down a bit. A pacemaker gave him a new boost. When his memory began to fail, he moved to the newly renovated assisted living wing of the monastery. It soon became necessary for him to move in the abbey infirmary, where he received devoted nursing care. Fr. Rembert remained, as much as his health allowed, ever-present at meals, the Divine Office and Mass. During the Easter Octave it became apparent Fr. Rembert needed to go to the hospital. In the quiet hours of April 15, 2020, Fr. Rembert passed safely into eternal life. Fr. Rembert took seriously Our Holy Father Benedict's dictum in the Prologue, whereby he never swerved from the Lord's instructions, and faithfully observed his teaching in the monastery until death (cf. RB Prologue, 50). Fr. Rembert was predeceased by his parents, Anna and Francis, and a niece, Muriel Crisanti. In addition to his monastic family, Fr. Rembert is survived by his sister, Adel, and her husband, Ilio Crisanti, and their children: Sharon Soltmann (Thomas), Michael Crisanti (Candace), Cheryl Crosby (Christopher) and Robert (Kim), and ten great-nieces and nephews. Due to the coronavirus pandemic, Fr. Rembert's obsequies will be celebrated privately. The Office of the Dead will be sung at 6:45 p.m. Friday, April 17. His body will return to the abbey church on Saturday, April 18, followed by the Funeral Mass (live-streamed) and interment in the abbey cemetery. Donations in Fr. Rembert's memory to support the abbey capital improvements, health care of the monks or abbey endowment may be made using the following link: https://www.saintmarysabbey.org/support-us. Abbot Richard and the monks of St. Mary's Abbey request the customary suffrages for our confrere, Fr. Rembert.

The family of FATHER REMBERT FRANCIS REILLY, OSB created this Life Tributes page to make it easy to share your memories.