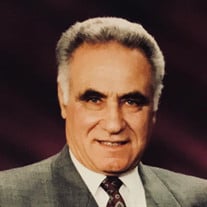 Francesco Carbone passed away peacefully Sunday evening, December 15, 2019 at the Visiting Nurse Hospice at St. Clare's Hospital in Dover, surrounded by his loving family. He was 87. Born July 21, 1932 in Montella (AV) Italy. He immigrated to Switzerland as a young man in 1957, and then to the United States with his wife and three young children in 1973, settling in Jersey City, NJ. He moved to the Towaco section of Montville Township in 1983, into the home he built with his own hands, and with the help of his friends and family. Mr. Carbone, a construction worker by trade, worked with several organizations in Switzerland. Upon coming to New Jersey, he was part of Local 325 Laborers Union of Jersey City, where he served proudly for many years, retiring in 1995. A loving husband “marito”, father “Papa`”, grandfather “Nonno”, uncle “Zio” and great friend “grande amico” or “compare Ciccio” to his friends; All that met him loved him. He loved to entertain and was the gregarious one in the bunch. Love of his family was the center of his life; his grandchildren were his world. He loved nothing more than having everyone over for Sunday dinners sitting round the long dining room table eating the home-made pasta his wife made, drinking the homemade wine he made, and listening to the buzz of the animated conversation round him for hours, often loud, ending with singing his favorite Italian songs. He loved hearing about his family's lives, peppering in his words of advice and wisdom. Sometimes a twinkle in his eye, we could understand him with a look. He also loved gardening, spending hours a day tending to his over 100 tomato plants, producing unending pounds of lettuce, string beans, peppers, eggplant, the largest squash ever and herbs. He and his wife had the “farm-to-table” concept in place before it became a “thing” in the US. He loved playing cards with the Italian deck often burning the midnight oil on weekends with his sisters-and-brother in laws. He taught his children and grandchildren at a young age the games of “Scopa” and “Briscola”. Even in his last year when his memory was fading, none could beat him – his memory of the cards so sharp. He loved playing bocce in the backyard court he built, with his neighbors, friends, and family with beer in hand, and a rarely lost a game. Each morning one could find him reading the Italian newspaper America Oggi where he read and followed US news and politics. Each Sunday one could find him watching the Italian League soccer games – any and all - following especially his “hometown” team Napoli. None could disturb him during a soccer game, not even to have Sunday lunch. . Francesco was a man of few words but great action and example. A man of great strength, presence, courage, wisdom with an entrepreneurial spirit. He knew the meaning of the word sacrifice, respect and a strong work ethic – at the core of his values. Francesco was preceded in death by his loving wife, Pasqualina “Lina” (nee Sapio) in November 2018 with whom he celebrated 59 years of love, happiness and devotion; his parents, Gaetano and Gioconda (nee Fierro) Carbone; a brother, Giovanni Carbone and his grandson Michael Nadzak. Survivors include his three daughters, Angela Carbone of Morris Plains, Auris Vanderbilt and her husband, Steven of Mendham and Edvige Glennon and her husband, Patrick of Towaco; a brother Aurelio in Germany and a brother Mario in Italy; and seven grandchildren Angelica, Alex and Olivia Vanderbilt and Aidan, Emmett, Ian and Brendan Glennon. Also surviving are numerous loving sisters-and-brothers-in-law, nieces, nephews, cousins, great nieces and great nephews residing in New Jersey, Pennsylvania, Rhode Island, New Hampshire, as well as in Germany, Switzerland, Italy, England, and Argentina. In his last year, Francesco slowed down due to illness. He was wonderfully cared for by his caretaker Doris. One could always find him sitting outside overlooking his garden.

The family of FRANCESCO CARBONE created this Life Tributes page to make it easy to share your memories.

Send flowers to the CARBONE family.