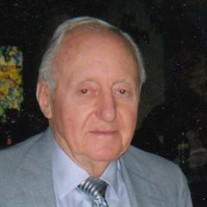 Frank “Babe” Patrisso, 95, passed away peacefully at his home in Montville, NJ, on March 26, 2021. He was born and raised in Garfield, NJ, on January 15, 1926. Frank also lived in Saddle Brook, NJ, before moving to Montville in 1966. Frank attended Garfield High School and was one of the founding members of the Holy Name Cadet Drum and Bugle Corp. established in 1934. At the age of 17, he joined the United States Navy and served in World War II from 1943 to 1946. Frank was stationed on the USS Lynx (AK-100) Ship in San Francisco which carried cargo to locations in the Asiatic-Pacific Theater. He achieved the rank of Coxswain and received several medals for his service. Frank was a devout husband, married to Dolores Bashaw for over 66 years until her passing in 2016. They were parishioners of St. Pius X Roman Catholic Church in Montville. For over fifty years, Frank worked as a professional photographer alongside his partner and brother, Nick Patrisso, who were the owners of Ackerman Photography Studio in Clifton, NJ, before retiring in early 2000. He was also a member of the Professional Photographers Association of NJ and the Knights of Columbus. Frank was predeceased by his loving wife, Dolores, and his brothers, Nicholas Patrisso, Jr. and Edward Patrisso. Survivors include his three loving daughters, Karen Rupp of Newton, Arlene Miller of Mount Olive Township, and Janice Patrisso of Montville; five grandchildren, Dana, Brian, Michael, Ryan and Alyssa; and one great-granddaugher, Charley Anne. While flowers will be graciously accepted, the family would be most grateful for memorial gifts to the Montville Township First Aid Squad, P.O. Box 416, Montville, NJ 07045.

The family of FRANCIS PATRISSO created this Life Tributes page to make it easy to share your memories.

Frank “Babe” Patrisso, 95, passed away peacefully at his home...

Send flowers to the PATRISSO family.