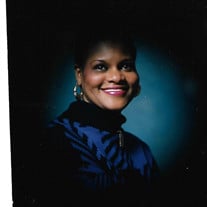 Jacintha Cassandra Thomas Rooney affectionately known as Sandra or Sandy was born on October 28, 1958 on the Beautiful Island of Basseterre St Kitts to the proud parents of Noel Walter Thomas and Cynthia Dorothy Thomas (Deceased). She was the last of four children (Sisters Bernadette and Rhonda) (Brother Arvonne (Deceased). Her childhood was filled with Love and Laughter as she was raised by her Godmother and Husband (Elaine and Aster Coker) (Deceased). Her extended Family became her Brother Dennis Berkley (Cutie) and Sister Shirley Coker. Her Brother Dennis (Cutie) loved her immensely. He stood be her through thick and thin, they were like two pea in a pod. Been the Sister of Dennis Berkley (Cutie) Sandy was lucky enough to gain a Sister-in-Law/Friend Zelda Clarke who loved her unconditionally , there was nothing Zel did not do for Sandy and in return Sandy Loved her. Sandra attended Private and Public Schools on the island of St Kitts. She pursued many careers there before moving to the United States of America in the year 1983. She lived in many states including Philadelphia, New York and New Jersey where she finally made it her home. Sandy's greatest accomplishment living in the USA was giving Birth to her Son Dion Slack. He is Sandy's fiber of her body. She laid down her life for him over and over again. Having a conversation with Sandra the highlights was always Dion and his accomplishments. (Its always Dion this and Dion that) I couldn't get a word in edge wise. (anybody who knew Sandy know she was a great talker). Another major accomplishment in Sandy's life other than Dion was her Long Life partner and caretaker John Venezia, she spoke about him twenty four seven if given the chance, and when I met him I saw why. God put John in my Sister's Life for a reason, and that is they Loved each other with a Passion, but when my Sister fell ill at an early age John stepped up to the plate. He is a very compassionate and Loving person and with my Sister's sickness she needed that compassion. He has such a kindhearted spirit that I often see why my Sister Loved him so. He was her strength and so attentive to Sandy's every need. He fed her, took her to dialysis, bathe and dressed her. He did everything for Sandy and more. He Loved her with every being of his body and I know today, days and weeks and months to come is going to be very difficult for him, and we pray that God gives and surrounds him with the strength and courage to face whatever comes before him. (JOHN YOU WERE HER KNIGHT IN SHINING ARMOR) . Sandra was a hard worker and enjoy performing a good job in all that she did, yet always sharing her compassion and kindness. Sandra had many beautiful characteristics, so many we can't name them all here, but in addition to all we mention, she will always be remembered for her fashion savvy style and makeup. She loved to get dressed up whether it was a backyard barbecue or a black tie wedding, you can count on her to dress to impress. She was also known for her spectacular cooking, Fungi and Black Cake was her specialties. We all know she could out do the best Caribbean cooks with her peas and rice, red peas soup, mac and cheese, fry fish, dumplings and too many items to mention. One thing for sure you know if Sandra cooked, it was more than good. She loved to decorate her home, she loved curtains and Bathroom accessories, pictures and so forth. Sandra was always full of life, smiling. She always had a positive outlook on life, despite difficult circumstances, you can hear her say "GOD IS LOVE". She was a :Loving Mother, Long Life Partner, Sister, Brother, Aunt, Sister-in-Law, Cousin, Friend. On Wednesday May 29th, 2018 the Lord called er home. May she rest in peace and God's peace cover and comfort all who knew and loved her. We Thank God for sharing his SPECIAL SPARKLING ANGEL with us for 59 years JACINTHA CASSANDRA THOMAS ROONEY. Jesus bore all my sickness and my infirmities and by his stripes I am healed*******Jacintha Rooney

Jacintha Cassandra Thomas Rooney affectionately known as Sandra or Sandy was born on October 28, 1958 on the Beautiful Island of Basseterre St Kitts to the proud parents of Noel Walter Thomas and Cynthia Dorothy Thomas (Deceased). She was the... View Obituary & Service Information

The family of JACINTHA CASSANDRA THOMAS-ROONEY created this Life Tributes page to make it easy to share your memories.

Send flowers to the THOMAS-ROONEY family.