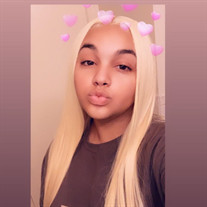 Jalen Monet Davis departed life on this earth on Friday, October 18, 2019. She was born on October 5, 1999 at Morristown Memorial Hospital by JoAnn Wydner (Merritt) and Ronald Davis. Jalen lived in Parsippany/Lake Hiawatha for a major part of her life. She attended Eastlake Elementary before moving to Rockaway Meadow and then attended Central Middle School. She played football, field hockey, soccer, and basketball for a variety of different club and AAU programs, such as Parsippany Soccer Club and The New Jersey Sparks. Toward the end of her seventh-grade year she moved to Acworth Georgia and finished at Barber Middle School. She continued to play basketball for the Warrior program and AAU. She graduated from North Cobb High School in 2018 as a dual enrollment student achieving 27 college credits. In the fall of 2018, she attended Georgia Southern University as a Sports Management Major. She felt that Music was her ultimate calling and decided to move back to New Jersey in April 2019. With hopes of furthering her career as a Hip-Hop artist, she spent hours writing music and burning the midnight oil at the studio with her manager, Uncle Marty, networking, and putting in 200% to achieve her dreams. Jalen also known as Jay Monet was passionate about her art and was creating a buzz in many areas in a short amount of time. She had showcases lined up in many locations. The first being on the night she was tragically taken from everyone. Although she was taken too soon, her legacy will always live on through her music and the love of God she bestowed on anyone she encountered near or far. Now our Queen is amongst the highest form of royalty just as she was destined. Jalen has the loving family of the following: Her parents JoAnn and Richie Merritt, Ronald Davis (deceased); Siblings, Kiyana Davis, Isaiah Davis, Elijah Davis, Brayden Merritt, Ariel Merritt, Hope Merritt (deceased), Eternity Merritt (deceased); Grandparents Anthony and Felice Robinson, LeRoy “Pop Pop” and Karen Wydner (deceased); Great Grand Parents, Lucy Davis (deceased), Ralph and Shirley Davis; Uncles and Aunts, Ramar and Keisha Moyd, Douglas Wydner, Stephen and Valarie Covey; Great Aunts and Uncles, Samantha Davis, Tony Davis, Kareem and Audrey Bulle, Kathy Battle (deceased), and Yvette Moore; Countless cousins, adopted Aunts and Uncles and friends.

Jalen Monet Davis departed life on this earth on Friday, October 18, 2019. She was born on October 5, 1999 at Morristown Memorial Hospital by JoAnn Wydner (Merritt) and Ronald Davis. Jalen lived in Parsippany/Lake Hiawatha for a major part... View Obituary & Service Information

The family of JALEN MONET DAVIS created this Life Tributes page to make it easy to share your memories.

Send flowers to the DAVIS family.