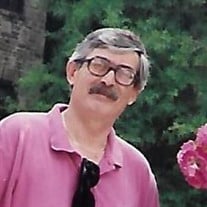 James Richard Davis passed peacefully away on Saturday morning, November 30, 2019 at the Center for Hope Hospice in Scotch Plains, NJ. He was 78. Although known by his work colleagues and contemporaries as J.R., James is known to most of his friends and family as “Jim.” As a father and grandfather, he is known as “Daddy” and “Grampa” respectively. He was more of an observer by nature, but was genuine, polite and thoughtful with a dry sense of humor. Born in Nashua, New Hampshire on July 22, 1941, Jim continued to be very much a New England-er at heart (slightest hint of the accent included.) Jim is the eldest of three brothers. His middle brother, Ron, lives with his wife, Joyce, in Florida. His youngest brother, Rick, lives with his wife, Darcy, in their childhood home on Prescott Street in Nashua. Both of his parents are now deceased. Jim’s mother, Eleanor, was an enthusiastic homemaker, accomplished cook and baker and part-time bookkeeper; his father, Richard, was a sheet-metal worker and church volunteer. Their household was strictly Methodist and quite conservative. A great emphasis was also placed on respect for hard work, family and the gifts of nature. As outdoor enthusiasts, Jim’s parent’s took he and his two brothers, Ron and Rick, camping to nearby lakes during the spring and summer months. The first in his extended family to attend college, Jim studied chemical engineering at Worcester Polytechnic Institute (www.wpi.edu) in Worcester, Massachusetts; married Kathryn Bradstreet soon after graduation and relocated to New York state with their eldest daughter, Elizabeth in 1966. Their second daughter, Pamela, was born 10 ½ months later (Irish twins!) They rented a home in Peekskill, New York while Jim worked at Fleischmann’s® (that company later merging with Nabisco, and thereafter purchased by Kraft), while Kathi worked on-call as a part-time X-ray technician in the emergency room of Peekskill Community Hospital. Relocating several times, first to Mohegan Lake, New York, then to Yorktown Heights, New York, Jim and Kathi eventually settled in New Jersey and have lived in the same house in Parsippany for more than thirty two years. Jim worked for Kraft for his entire 40-year career, traveling around the globe building and reconfiguring food processing plants and food processing techniques. He earned three U.S. patents but would be the last person to let anyone know about this prestigious achievement. Jim retired thirteen years ago. Jim had a lifelong fascination with wildlife, particularly birds. He was also an American history buff, with a focus on the Civil War, the Lincoln presidency, and World War II. Formerly a voracious reader of science fiction, fantasy and murder mysteries; a film and entertainment trivia buff; a recreational golf and tennis player, Jim was a huge fan of the Boston Red Sox, New England Patriots, college basketball and the Duke University Blue Devils. He was a member of Sigma Alpha Epsilon Fraternity and the Chemical Engineering Society. Jim was always a family-centered person. In addition to his wife Kathi, his siblings, Ron and Rick, and his daughters Elizabeth and Pamela (Tom), Jim was the proud grandfather of Matthew Liam, 19 and Kathryn Elizabeth, 10. Services were held privately. A Memorial Celebration of Jim's Life will be announced in the spring. For those desiring, the family would be grateful for memorial gifts in Jim's Memory to either Center for Hope Hospice, (www.cfhh.org) or Atlantic Health Hospice at Morristown Medical Center (www.atlantichealth.org/hospice.html).

James Richard Davis passed peacefully away on Saturday morning, November 30, 2019 at the Center for Hope Hospice in Scotch Plains, NJ. He was 78. Although known by his work colleagues and contemporaries as J.R., James is known to most of his... View Obituary & Service Information

The family of JAMES RICHARD DAVIS created this Life Tributes page to make it easy to share your memories.

Send flowers to the DAVIS family.