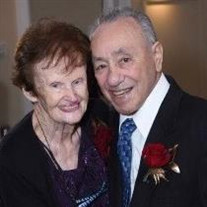 James Pontrella, passed away Saturday afternoon, June 8, 2019. He was 88 years old. Born in Newark, NJ, James was a longtime resident of Belleville before coming to Montville Township, NJ 18 years ago. He earned his Bachelors Degree from Seton Hall University in 1952. James married Anne “Nancy” McLoughlin in 1953 and the couple began a love affair that lasted 66 years. Over those 66 years James and Anne raised four children, who then gave them 10 grandchildren and those grandchildren gave them two great grandchildren and counting. A certified public accountant, Mr. Pontrella was the owner and proprietor of James Pontrella Co., CPA’s in Bloomfield for 36 years, retiring in 1988. James was a member of St. Pius X R.C. Church and the Montville Seniors. He was also a member of the Holy Name Society and the St Peter’s Knight of Columbus Council of Belleville. He was preceded in death by his loving wife Anne, nearly one month to the day, on May 9, 2019; and his siblings, Michael Pontrella, Faye Pontrella, Patsy Pontrella, and Victor Pontrella. James is survived by his sons; James Pontrella, Jr. and his wife Sharon of Whippany, NJ, and John Pontrella and his wife Mary of Nutley, NJ; his daughters; Mary Lansmann and her husband Richard of Palm Harbor, FL, Anne Soliman and her husband Michael of Pine Brook, NJ; three siblings, George Pontrella of Belleville, NJ, George Gugliotta and his wife Marge of Toms River, NJ, and Helen Smith of Nutley, NJ; a sister in law, Helen Pontrella of Belleville, NJ and a brother in law, James McLoughlin and his wife Akiko of Carlsbad, CA.; his grandchildren, Caitlin Pontrella, Megan LoBello and her husband Vincent, Samantha Pontrella, Laura Ritacco and her husband Patsy, Amy DeMunno and her husband Michael, David Pontrella, Sara Lansmann, Jenna Lansmann, Colleen Bucsko and her husband Charles, and Alexander Soliman; and two great-grandchildren, Anna Lansmann and Allison Ritacco. James believed in family first. He led by example, with his beautiful wife Nancy, on how to live, enjoy, and be in love. He believed in the tradition of Sunday dinner, encouraging his family to be close, to show up and love one another, give advice, share stories and be involved in and celebrate each other's lives. He was an adviser, a confidant, a mentor, a baby whisperer and "Grandpa" not just to his family, but to all who knew him. In lieu of flowers, the family would be grateful for donations to Atlantic Hospice, 465 South Street, Suite 100B, Morristown, NJ 07960

James Pontrella, passed away Saturday afternoon, June 8, 2019. He was 88 years old. Born in Newark, NJ, James was a longtime resident of Belleville before coming to Montville Township, NJ 18 years ago. He earned his Bachelors Degree from... View Obituary & Service Information

The family of JAMES J. PONTRELLA created this Life Tributes page to make it easy to share your memories.

Send flowers to the PONTRELLA family.