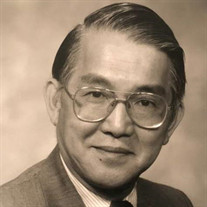 Joe Shui (徐逢崑) passed away peacefully at his home in Montville, NJ on November 6, 2018, aged 87, surrounded by family. One of nine siblings, he was born on January 22, 1931 in PingXi (平溪), a small town outside of Taipei, Taiwan. He worked hard throughout his childhood, learning Taiwanese, Japanese, and (Mandarin) Chinese and excelling in school. He later moved to the port city of Keelung (基隆). He earned his undergraduate degree in Agricultural Economics from the prestigious National Taiwan University (台灣大學). After graduation, Joe served in the military and worked for the Land Bank of Taiwan (臺灣土地銀行). In 1960, he began his journey of living the American dream by boarding a four-week freight ship to Long Beach, California. He earned his graduate degree from Oklahoma State University and settled in the United States for the rest of his life. Joe spent summers in New York City where he worked and lived at the Nippon Club, meeting famous dignitaries and film stars. It was also in New York that he met and married his beloved and beautiful wife, Jennie. While raising three children with Jennie, Joe beat colon cancer, built a successful career in the pharmaceutical industry (traveling to Europe and Asia regularly), and taught Statistics as an associate professor at Montclair State College. He retired as the Director of Statistics from the Swiss company Sandoz (now Novartis) in 1994. Joe lived retirement to the fullest, continuing to read The New York Times, listen to N.P.R., play poker, bridge, and mahjong, sing karaoke, and explore the world with Jennie by his side. Joe volunteered at the Montville Senior House, teaching TaiChi to adoring students for over a decade before “retiring” in July of this year. He will live on in the hearts and memories of dear friends, his loving wife Jennie, children Joyce (Ray), Conway (Elaine), and Jo (Jeff), and 10 grandchildren (Kiana, Sophia, Julia, Thaddeus, Emma, Addison, Talia, Avery, Cleo, and Callan), all of whose birthdays he knew by heart. Joe and his family have always been grateful to Memorial Sloan Kettering and Dr. Alan Turnbull for saving his life 37 years ago. Donations may be sent in memory of “Joe H.K. Shui” by calling 866-815-9501, sending a check to Memorial Sloan Kettering Cancer Center, Attn: Annual Giving Programs, 885 Second Avenue, 7th Floor, New York, NY 10017, or going to http://mskcc.convio.net/goto/joeshui.

The family of JOE H. K. SHUI created this Life Tributes page to make it easy to share your memories.

Joe Shui (徐逢崑) passed away peacefully at his home in Montville,...

Send flowers to the SHUI family.