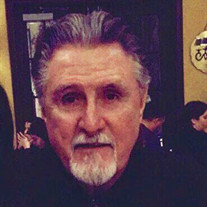 John Kevin Sharkey, 67, passed away Saturday, December 30, 2017 at the Robert Wood Johnson Hospital in New Brunswick.  Born and raised in Newark, he had lived in Parsippany, Morristown, and Saugerties, NY for the last 17 years before recently moving to Cranford. John was a decorated US Army Veteran having served in the United States Army during the Vietnam War. He served as a Spec 4 and mortar specialist with the 23rd Infantry of the Army Combat Special Forces Unit. John flew over 150 helicopter missions over combat and was wounded in action. For his service, he was awarded the Purple Heart, the Bronze Star with Combat, the Distinguished Combat Action Ribbon, Combat Infantry Badge, the Vietnam Service Medal, the Army Good Conduct Medal, the Army Commendation Medal, and two Air Medals. An electrician, John was a longtime member of the Local #68 Giblin Association of the Operating Engineers in Farifield. He retired in 2000. John was an avid hunter, fisherman and boater, and a Harley Davidson enthusiast. He was a member of the Hess Angels Harley Davidson Club, American Legion Post 342 and the Veterans of Foreign Wars.  Survivors include his beloved wife, Joanne C. (nee Melillo); his loving daughter, Stefania K. Sharkey and her companion, Frank D'Olivera of Jefferson; step-children, Bob Tarantino and his wife Rose of Clark, Cheryl Barese and her former husband John of Rhinebeck, NY; Maria Rizzolo and her husband Peter of Randolph, and Gabriella Popo and her husband Joe of Scotsdale, AZ; his siblings, Thomas Sharkey of Oak Ridge, Karen Del Riccio of Florida, James Sharkey of Lake Hiawatha, Michael Sharkey of Lake Hiawatha, and Joseph Sharkey of Lake Hiawatha; his step-grandchildren Giana Maria Barese, Anthony James Tarantino and Giovanni Barese;  and several nieces and nephews.  He was preceded in death by his siblings Patrick Sharkey, Marion Curran, and Virginia Roman. In lieu of flowers, the family would be grateful for memorial Gifts to the Wounded Warrior Project, Inc. (woundedwarrior.org).

John Kevin Sharkey, 67, passed away Saturday, December 30, 2017 at the Robert Wood Johnson Hospital in New Brunswick.  Born and raised in Newark, he had lived in Parsippany, Morristown, and Saugerties, NY for the last 17 years before recently... View Obituary & Service Information

The family of JOHN KEVIN SHARKEY created this Life Tributes page to make it easy to share your memories.

Send flowers to the SHARKEY family.