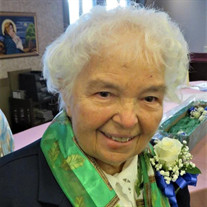 Sister Joseph Marian Hudson, 91, a Sister of Charity of Saint Elizabeth, died Thursday, June 3, 2021 at Saint Joseph’s Hospital in Paterson, NJ. The wake for Sister Joseph Marian Hudson will be held in Holy Family Chapel, Convent Station, NJ on Tuesday, June 8, 2021 from 9:30 to 11:00 a.m. followed by a Mass of Christian Burial at 11 a.m. Burial will follow at Holy Family Cemetery, Convent Station. Funeral arrangements are under the direction of SJ Priola Parsippany Funeral Service. Sister Joseph Marian was born in Belleville, New Jersey, the daughter of Anthony and Marie (Loranger) Hudson. She entered the Sisters of Charity on October 1, 1950 and was a member for 70 years. Sister Joseph Marian graduated from the then College of Saint Elizabeth, Convent Station, NJ with a B.S. degree in Elementary Education and from Seton Hall University, South Orange, NJ with an M.A. degree in Reading. Sister Joseph Marian served in the ministry of education in New Jersey. She served as a teacher at Our Lady of All Souls School, East Orange; Saint Catherine School, Glen Rock; Saint Mary School, Nutley; and Saint Thomas School, Bloomfield. She was an Administrator at Mother Seton Residence, Montclair; a staff member at Mount St. Andrew Villa, Paramus; a Librarian at Maywood Center for Health, Maywood; and a Volunteer at Saddle Brook Nursing Home, Saddle Brook. Her commitment and service was experienced in both the educational and health ministries of which she was a part. Sister Joseph Marian (Aunt Loraine) was loved by all who met her. She will be remembered for her ability to bring laughter with her jokes and her gift of being able to gather people for a good social happening. A woman of prayer, Sister Joseph Marian embodied the spirit of boundless charity to which she committed herself for 70 years as a Sister of Charity of Saint Elizabeth. She is survived by the Sisters of Charity and her sister Marie Gallagher. She was predeceased by her niece Nancy. Sister Joseph delighted in her seven nieces and nephews and fourteen grandnieces and grandnephews. In lieu of flowers, contributions to the Sisters of Charity Development Fund, P.O. Box 476, Convent Station, NJ, 07961-0476 would be greatly appreciated.

The family of SR JOSEPH MARIAN HUDSON, SC created this Life Tributes page to make it easy to share your memories.

Sister Joseph Marian Hudson, 91, a Sister of Charity of Saint...

Send flowers to the HUDSON, family.