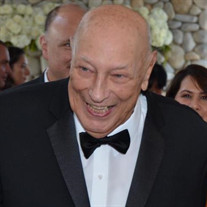 Joseph Raymond Lauda passed away peacefully Thursday evening, September 19, 2019 at Morristown Medical Center. He recently celebrated his 91st birthday. Born and raised in Newark, NJ, Joseph had lived in Bloomfield, NJ before coming to Montville Township, NJ in 1969. Mr. Lauda served in the United States Army during the Korean War. At the age of 15 he began working in the Belleville Florist Shop. He later purchased the shop with his brother-in-law, Pat Engallena. Together, they ran the business together for decades. Joseph retired at the age of 75. Joseph took great pride and joy in his family. They were his world. He is survived by his beloved wife of nearly 66 years, Mary Assunta (nee Engallena); four children and their spouses, Debbie Lauda of Hackettstown, NJ, Joanne Nardella and her husband Giuseppe of Montville, NJ, Judy Amoroso and her husband Michael of Montville, NJ, and Joe Lauda and his wife Precy of Mount Arlington, NJ; two brothers, Art Lauda and his wife Julie of Little Falls, NJ, and Nick Lauda of Little Falls; eight grandchildren and their spouses, Peter Nardella and his wife Micaela, Nicole Gonzalez and her husband Angel, Kaleena Garza and her husband Luke Mott, Lisa DeGaetano, Stacy Garza, Jacqueline Craig and her husband Justin, Alyssa Amoroso and Donna Conklin and her husband Tim; and two great-grandchildren, Juliana and Natalie Gonzalez. Joseph was preceded in death by his two sisters, Louise Spinelli and Evelyn DeBello. While flowers will be graciously accepted, for those who prefer, the family would be grateful for memorial gifts to The Disabled American Veterans, 3725 Alexandria Pike, Cold Spring, KY 41076 (www.dav.org).

The family of JOSEPH R. LAUDA created this Life Tributes page to make it easy to share your memories.

Send flowers to the LAUDA family.