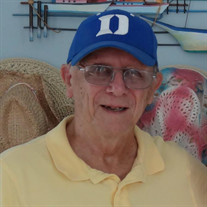 Joseph W. Sommer, 89, passed away suddenly Friday morning, March 19, 2021 in the presence of his beloved wife at their Surf City, NJ home. Born on April 7, 1931 in Jersey City, NJ, he was the son of the late Joseph T. and Frances Boehning Sommer. He is survived by his wife of 54 years, Bonnie (nee Dick) Sommer; two loving daughters, Julie Armbruster and her husband Landon, and Jaimie Gigerian and her husband Marc; and three cherished granddaughters, Summer and Jordyn Gigerian, and Kelsey Armbruster. Joe lived in Hudson County for 25 years, then in Parsippany-Troy Hills for 38 years. Following his retirement in 1994, he and Bonnie moved to Surf City on Long Beach Island, NJ where they lived for 26 years. He graduated from Union Hill High School in Union City, NJ, where he was co-editor of the yearbook. He received his BA from Montclair State College in 1954 and his Masters Degree also from Montclair in 1956. While at college, he was a member of the Math Club, the Aphesteon Honorary Math Society, the Citizenship Club, the Student Government Association, Forum (the Men's Club) and Kappa Delta Pi. Joe began his teaching career in 1954 in Parsippany-Troy Hills Township, teaching 7th and 8th grade math at Central School before retiring in 1994. For 38 years, he was Head of the Math Department, Director of Student Activities, Advisor to the Student Council, and for 24 years, the Music Director for all the school musicals, each of which was a Broadway play. He received several special awards. Upon graduating from Montclair, he was honored for his outstanding school spirit with an award from all the athletes. While at Central, he was chosen to receive the first ever Secondary Teacher of the Year Award for the entire district in 1978. For his 40 years of service to the State Student Councils, he was honored in 1994 for participating in all the activities; for 10 consecutive years he organized Central's Student Council to contribute the most money of any middle school in the state to selected charities chosen by the State Student Council. During his teaching career he was a member of the PTHEA, NJEA, NEA, and later, the NJREA. Joe was a member of the Mt. Tabor United Methodist Church since 1956, singing in the church choir, often as a soloist. He was a loyal Mets baseball and Giants football fan, as well as a staunch supporter of Duke University Men's Basketball team. In lieu of flowers, the family would be grateful for memorial gifts to either Boystown (http://boystown.org) or The Salvation Army (http://salvationarmy.org).

Joseph W. Sommer, 89, passed away suddenly Friday morning, March 19, 2021 in the presence of his beloved wife at their Surf City, NJ home. Born on April 7, 1931 in Jersey City, NJ, he was the son of the late Joseph T. and Frances Boehning... View Obituary & Service Information

The family of JOSEPH W. SOMMER created this Life Tributes page to make it easy to share your memories.

Send flowers to the SOMMER family.