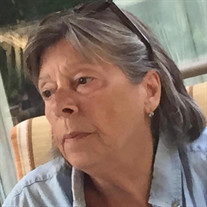 Judy McBride (nee Tarantino), 70, passed away suddenly Wednesday, December 4, 2019 at Morristown Medical Center. Born and raised in Paterson, she had lived in Totowa, and many years in Denville before moving to Parsippany in 2006. Ms. McBride had been a real estate broker with Berkshire Hathaway Realtors in Morristown for the last 25 years. Previously, she worked with BMI International in Summit. Judy was a fixture in Denville. She was an active, longtime member of the Denville Historical Society, where she was currently serving her 12th term as president, the Rotary Club of Denville, where she was a former chair of its Denville Street Festival, and the Denville Chamber of Commerce. She also served several terms on the Denville Board of Adjustment. She was a volunteer with St Clare's Harvest Festival and the Joey Bella Fund. Judy was proud to be named Lakeland Hills YMCA Citizen of the Year in 2012. She did so much more; her true efforts were behind the scenes. Anytime someone was in need of help, Judy was there, providing personal support as well as organizing assistance as needed. She led by example. She disliked being recognized for her contributions. Her volunteering was not for recognition but to make a significant impact on the lives of others. Preceded in death by Eugene McBride, she is survived by her loving children, Patrick J. McBride and his wife Jennifer of Randolph, and Karen J. Shields and her husband Edward J. of Parsippany; her parents, Carmen and A. Marie (nee Kieran) Tarantino of Totowa; her siblings, Father John F. Tarantino Pastor of Resurrection R.C. Parish in Randolph, Gale A. Van Hefter and her partner Paul DeLeo of Paterson, and Frank B. Tarantino of Totowa; and eight beloved grandchildren, Brendan, Kailey, Chase, Bryce, Jack, Reese, Cora, and Ellie. In lieu of flowers, the family would be grateful for memorial gifts to either the Denville Historical Society, 113 Diamond Spring Road, Denville, NJ 07834 or Resurrection Roman Catholic Parish Memorial Fund, 651 Millbrook Avenue, Randolph, NJ 07869.

Judy McBride (nee Tarantino), 70, passed away suddenly Wednesday, December 4, 2019 at Morristown Medical Center. Born and raised in Paterson, she had lived in Totowa, and many years in Denville before moving to Parsippany in 2006. Ms. McBride... View Obituary & Service Information

The family of JUDY McBRIDE created this Life Tributes page to make it easy to share your memories.

Send flowers to the McBRIDE family.