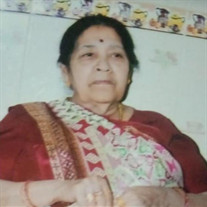 Kamlaben Raojibhai Patel passed away suddenly on Wednesday morning, September 11, 2019 at Morristown Medical Center. She was 85. Born in Piplav Anand, Ahmedabad, India, she immigrated to the United States in 1999 settling in Parsippany-Troy... View Obituary & Service Information

The family of KAMLABEN R. PATEL created this Life Tributes page to make it easy to share your memories.

Send flowers to the PATEL family.