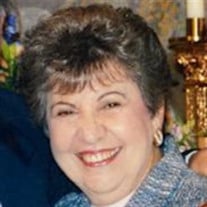 Mary Marocco (nee LaMonica) passed away peacefully on November 28, 2020, at the age of 89. She was born on February 24, 1931, in Brooklyn, New York, to Charles and Rose LaMonica (Blando) and grew up in Fair Lawn, New Jersey. Her parents and her sisters, Joan Boch and Dorothy LaMonica, predeceased her. When she was in her early twenties, she visited a coworker’s house where she saw a photo of her friend’s brother, Adolfo (Al) Marocco, who was serving in Korea. They began corresponding and fell in love via letters. They were married on November 4, 1954. Mary and Al had two children, Greg Marocco of Montville and Cheryl Bookstaver (John) of Montville. Being a mother was the best thing that ever happened to Mary, and her family was her world. Mary was a force of nature. Before retiring, she worked as an accounts payable supervisor and manager, and excelled in her job. She and Al loved travelling and visited over 65 different countries in their adventures. At home in Montville where they lived for five decades, they loved going to the theatre, and spending time with friends and family. They cherished their granddaughters Alli Hartley-Kong (Kovit) of Caldwell and Lexi Hartley (David Specht) of Ithaca, New York. Al and Mary were married for 63 years before Al’s death in 2017. In addition to her children and grandchildren, Mary is survived by three “bonus” grandchildren, Christopher (Mindy) of Hardyston, Andrew (Krista) of Pompton Lakes, and Nicole (Claudio) of East Rutherford, as well as several great-grandchildren. She is also survived by two nephews, Darren Boch (Terry) of Parsippany and Steven Boch (Letecia) of Morris Plains. Mary was a member of the Montville Seniors, The Barn Theatre, and a longtime parishioner at St. Pius X Church. In lieu of flowers, donations can be made to St. Jude’s Children’s Hospital (www.stjude.org) or the Barn Theatre, Skyline Drive, Montville, NJ 07045.

Mary Marocco (nee LaMonica) passed away peacefully on November 28, 2020, at the age of 89. She was born on February 24, 1931, in Brooklyn, New York, to Charles and Rose LaMonica (Blando) and grew up in Fair Lawn, New Jersey. Her parents and... View Obituary & Service Information

The family of MARY MAROCCO created this Life Tributes page to make it easy to share your memories.

Send flowers to the MAROCCO family.