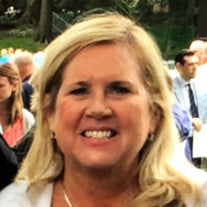 Mary Pat Paris (nee Regan) passed away suddenly Wednesday, August 16, 2017 at her home in Bernardsville, NJ. She was 52. Born in Morristown, NJ to the late William F Regan Jr. and Dolores M. (nee Dillon) Regan, Mary Pat grew up in Montville, and had lived in Montgomery Township before coming to Bernardsville 16 years ago. She was a graduate of Montville High School and Villanova University. Following graduation, Mary Pat started her career in finance at E.F. Hutton. She later worked as a Convertible Bond Trader for Crestvale of NY and London, and with Paul Berkman & Co in Princeton and New York for 15 years before retiring in 2006. Mary Pat was a member of the Belmar Fishing Club and the Somerset Lake and Game Club of Far Hills. She was the devoted wife of 23 years to J. Craig Paris, a proud mother of her three sons; Liam, James, and Regan Paris. She is also survived by her siblings, Margaret Picklesimer (David) of Louisville, KY, William F. Regan III (Amy) of Chelmsford, MA, Thomas M. Regan (Rosemary) of Springboro OH, and John P. Regan (Susan) of Towaco, NJ; her mother-in-law, Nancy C. Paris of New Vernon, NJ; a sister-in-law, Nancylee Settle (William) of New Vernon, NJ; and twelve nieces and nephews. In lieu of flowers, the family would be grateful for donations in memory of Mary Pat Paris to The Delbarton School, Development Office 230 Mendham Road, Morristown, NJ 07960.

The family of MARY PAT PARIS created this Life Tributes page to make it easy to share your memories.

Send flowers to the PARIS family.