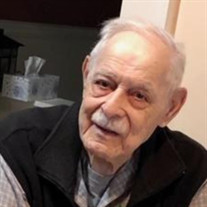 Norman Chase passed peacefully away Saturday morning, June 13, 2020 in his Lake Hiawatha home surrounded by his loving family and the music of Luciano Pavarotti. He was 86. Born and raised in Bronx, NY, Mr. Chase moved to the Lake Hiawatha section of Parsippany in 1961. He attended the City University of New York and later earned an Associates Degree in Criminal Justice from the County College of Morris in Randolph, NJ. Mr. Chase had worked as a manager and later the Manager of Accounts Payable with the Mirror Image Company of Newark for 22 years, retiring in 1997. Previously he was the proprietor of Roncyn Inc. Ladies Clothing at the Willowbrook Mall in Wayne. A member of Pine Brook Jewish Center, he was also a member and instructor of The National Rifle Association and the Pine Brook Trap & Shooting Club. He was a former member of the Lake Hiawatha Seniors. An avid pinochle player, Mr. Chase enjoyed volunteering at the Morris County Courthouse and worked the polls at every election. Mr. Chase is survived by his loving wife of 62 years, Cyndy (nee Bohana) Chase; beloved daughters and sons-in-laws, Roberta Chase of Philadelphia, PA., Debra and Eric Levin of Las Vegas, NV., and Lisa and John Yorston of Boonton, NJ; grandchildren, Ryan and Jenny Levin, Joseph Levin, and Evan Yorston; and a great-granddaughter, Brinley Levin. He was preceded in death by his parents, Frieda and Joseph and his brothers, Milton and Murray. Services and Interment at the Mount Lebanon Cemetery in Iselin were held privately on Monday, June 15th. For those so desiring, the family would be grateful for memorial donations to either St. Jude Children's Research Hospital (www.stjude.org) or the charity of one's choice.

Norman Chase passed peacefully away Saturday morning, June 13, 2020 in his Lake Hiawatha home surrounded by his loving family and the music of Luciano Pavarotti. He was 86. Born and raised in Bronx, NY, Mr. Chase moved to the Lake Hiawatha... View Obituary & Service Information

The family of NORMAN CHASE created this Life Tributes page to make it easy to share your memories.

Send flowers to the CHASE family.