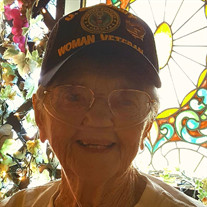 Patricia “Pat” Fitzgerald, 81, entered eternal life on October 13, 2017 in Parsippany, New Jersey. Pat was born on August 7, 1936, the third of eight children, to Thomas V. Fitzgerald and Anna Posochowicz in Brooklyn, New York. She graduated from Fort Hamilton High School in 1954 and entered the US Army as part of the Women’s Army Corp that same year. She served proudly for twenty-two years. During her service she traveled to Europe, specifically Germany and France, as well as serving in various military bases around the United States. She retired in August of 1976 from White Sands Missile Range and settled in El Paso, Texas where she lived for over forty years. Family was extremely important to her and she was an amazing sister, aunt and godmother. She was a devoted friend to all who knew her. She loved with her whole heart. She was a dedicated member of the Catholic Church, especially Christ the Savior Catholic Parish in El Paso where she volunteered for many years. Pat was preceded in death by her parents Thomas and Anna. She is survived by her sisters Elizabeth (Betty) Piccirillo, Barbara Burrows, Rita (John) Hynes, and Maureen Heaney, her brothers Thomas (Graceanne) Fitzgerald, James Fitzgerald, and William (Anna) Fitzgerald, as well as her numerous nephews, nieces and godchildren We are grateful for the staff at St. Joseph’s Regional Medical Center in Paterson, New Jersey, and for the staff of Care One in Parsippany for their support. In lieu of flowers, please donate to the local Veteran’s Association.

The family of PATRICIA A. FITZGERALD created this Life Tributes page to make it easy to share your memories.

Send flowers to the FITZGERALD family.