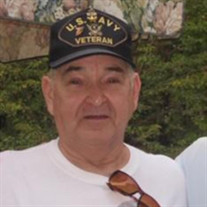 Philip Emery Gardner passed away Monday evening, March 16, 2020 at Morristown Medical Center in Morristown, NJ following a sudden illness, surrounded by his loving family. He was 85 years young. Born on February 21, 1935 to Stanley Freeman Gardner and Mary Stella (nee White), and raised on the family farm, "Patterson Ridge" in Thorndike, Maine. Philip lived with his grandparents, Rufus and Phoebe Gardner, during World War II while his father fought in the South Pacific. In 1947, the family moved to Falmouth MA, where he lived with his mother and step-father, Harold Otis McComiskey (Skipper) and his siblings. In September of 1952, Phil left his senior year at Lawrence High School, Falmouth Massachusetts to join the U.S. Navy in Portland, Maine. He attended Boot Camp at Bainbridge Naval Training Center at Perryville, Maryland. Following his graduation from Company No. 44 in April 1953, Phil was transferred to Bayonne Naval Supply in Bayonne, NJ. In September 1953, Phil met his Sweetheart and the Love of His Life, Mary Celene Crane while she was attending her senior year at Holy Family Academy in Bayonne, NJ. Phil and "Celene" were married on October 15. 1955 at All Saints R.C. Church in Jersey City, NJ. Phil served on the USS Shasta A-E 6 (Ammo Ship) in the Mediterranean from November 1954 until February 1956 as a Boatswain Mate, 3rd Class Petty Officer. He was honorably discharged in 1961 after serving 3 years active duty and 5 years in the Naval Reserves. The Gardners lived in Falmouth, Massachusetts before returning to New Jersey in 1957 when he became a Police Officer for the Penn Railroad at Harborside Terminal in Jersey City. He joined the McRoberts Maritime Police in January 1959, which required that he be licensed by the Waterfront Commission of NY/NJ, as a security officer. He worked with the company for 39 years, attaining the position of Captain and Supervisor before retiring in 1997. Phil was a member of the American Legion Post #1000, the Veterans of Foreign Wars Post # 15031, and the Port Police Local # 1456. He was also a supporting member of the US Navy Memorial in Washington, D.C. In addition to hes parents and step-father, he was preceded in death by his brother Michael McComiskey. He is survived by his beloved wife of 65 years, M. Celene Gardner (nee Crane); his three loving daughters and their spouses, Kim M. Pope and her husband John of Plumstead, PA., Celene Luscher and her husband Gary of Hawthorne, NJ, and Noelle M. Gardner of Sherman Oaks, CA; his son-in-law, Robert Whitehead and his wife Kathryn of Hopatcong, NJ; a brother, Joel Gardner of Montville, ME; a sister, Anita Rickman of Dunbarton, NH; four half-sisters, Lynn Warman, Fern Ward, and Lori Gardner all of Maine, and Stacey Veneable of Pennsylvania; seven grandchildren, Brianne Fricke (Scott), Trevor Gardner Pope (Andrea), Kyle Pope (Ashley), Kevin Pope (Jeanette), Robert Whitehead (Jacki), Daniel Whitehead (Christine) and Kianna Noel Luscher; eight great-grandchildren; and his "beloved pomeranian," Molly. In lieu of flowers, the family would be most grateful for Memorial Gifts to the Wounded Warrior Project, (www.woundedwarriorproject.org/Donate). EFFECTIVE MARCH 19, 2020 … AT THE FAMILY'S REQUEST, AND IN THE INTEREST OF PUBLIC HEALTH, ALL SERVICES WILL BE HELD PRIVATELY, BY INVITATION OF THE FAMILY. A PUBLIC MEMORIAL MASS WILL BE OFFERED AT ST. PETER THE APOSTLE R.C. CHURCH IN THE FUTURE. PLEASE CONSULT THIS PAGE FOR UPDATES.

The family of PHILIP EMERY GARDNER created this Life Tributes page to make it easy to share your memories.

Send flowers to the GARDNER family.