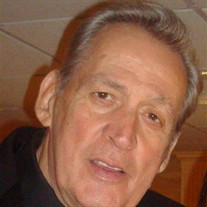 Ralph DeChristopher, Jr., 84, of Lake Hiawatha, NJ, passed away at home on April 7, 2019 with his loving wife at his side. Ralph enriched the lives of everyone that knew him and he will be missed dearly. Ralph was born in December 1934 in Newark, NJ to Ralph & Edith DeChristopher, Sr. After the end of WWII, he and his family lived in the army barracks located within Weequahic Park for many years. As a child growing up during The Great Depression, Ralph watched both of his parents work multiple jobs in order to make ends meet. His parents taught him the importance of responsibility and family. From this he learned the value of hard work early on, and held many interesting jobs during his youth, such as: a pin-setter in a bowling alley, a piece-work printer for a NYC newspaper and even a disc-jockey for a classical music station, just to name a few. He attended East Side High School in Newark and later went on to serve his country for 6 years in the US Army National Guard Reserves. Over the next decade, his career path led him to “Fabulous Las Vegas, NV,” as head of security for the Stardust Casino for many years. He returned to New Jersey, where he took on the position of leading Autoland’s security team in Springfield, NJ until his retirement in 1993. He was preceded in death by his parents Ralph & Edith DeChristopher and his sister Gloria DiModica. Surviving to cherish his memory are his beloved and devoted wife of 27 years, Karen (nee Ciesienski); his brother Fredrick DeChristopher and his wife Barbara, his children; Joanne Alban, Scott DeChristopher, Donna Michelle DeChristopher, Patrick Bellino, Donna Arthurs, Sondra Fisk and her husband Jim, his grandchildren; Danielle Browning and her husband Chris, Melanie Stephenson and her husband Trae, Amy & Sara DeChristopher, Ava Arthurs, Tim, Ty, Frankie & Cayci Fisk, and 3 great-grandchildren. Ralph and his wife have been Parsippany residents for over 20 years, during which time they devoted countless hours to serving their community. Although he was not officially a member of the organizations his wife was involved in, Ralph participated in events and volunteered his time to help them in their efforts. For years, he would deliver food to the Our Promise drop-in center for the homeless, transport seniors to their appointments, helped make and deliver baskets for tricky tray fundraisers, and set up tents at Relay For Life cancer walks. Ralph was a faithful servant of the Lord, a dedicated Trustee and member of First Baptist Community Church in Parsippany, NJ for over 12 years. He was a generous and passionate man that loved volunteering his time for many years helping the families of Family Promise of Morris County, an organization dedicated to ending homelessness and coordinated through a shelter program at his church. In lieu of flowers, the family would greatly appreciate donations to offset the cost of funeral expenses.

Ralph DeChristopher, Jr., 84, of Lake Hiawatha, NJ, passed away at home on April 7, 2019 with his loving wife at his side. Ralph enriched the lives of everyone that knew him and he will be missed dearly. Ralph was born in December 1934 in Newark,... View Obituary & Service Information

The family of RALPH DECHRISTOPHER, JR. created this Life Tributes page to make it easy to share your memories.