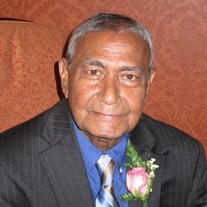 Ratilal Rambhai Mistry,  83, of Parsippany, NJ , died peacefully on Friday, February 24, 2017 with his loving family by his side. Funeral arrangements are under the care and direction of S.J. Priola, Parsippany Funeral Service. Funeral Pooja will take place on Sunday  morning from 9:30 a.m. to 12:30 p.m. at S.J.Priola, Parsippany Funeral Service 60 North Beverwyck Road in Lake Hiawatha, NJ 07034.  Funeral services will conclude promptly at 12:30 p.m.  Born in Amri, Gujarat, India to the late Rambhai and Benaben Mistry, Ratilal came to the U.S. in 1970 and settled in Union City where he lived until 2008 before moving to Parsippany, NJ where he has been a resident since 2008. He obtained his Bachelors and Masters degrees in India and worked as a Corporate Loan Officer with Chase Manhattan Bank in New York City. Devoted to his family Mr. Mistry was the beloved husband of 57 years to Gajaraben Mistry. Devoted father to Rama Mistry and her husband Jagdish Mistry, Bharti Mistry and her husband Hemant Mistry, Uma Mistry and her husband JaiPrakash Mistry, Nita Mistry and her husband Vijay Mistry, and Nilesh Mistry and his wife Tejal Mistry. Cherished grandfather to Shekar, Shyam, Jay, Sheila, Vanita, Deepen, Neil, Maya, and Roshan. Cherished great grandfather to Arya Mistry. Dear brother to Tapiben Tailor, Maniben Lala, Gangaben Mistry and late Parbubhai Mistry. Mr.Mistry is also survived by many loving nieces, nephews, cousins and friends and will be missed by all who knew him.

Ratilal Rambhai Mistry,  83, of Parsippany, NJ , died peacefully on Friday, February 24, 2017 with his loving family by his side. Funeral arrangements are under the care and direction of S.J. Priola, Parsippany Funeral Service. Funeral Pooja... View Obituary & Service Information

The family of RATILAL RAMBHAI MISTRY created this Life Tributes page to make it easy to share your memories.

Send flowers to the MISTRY family.