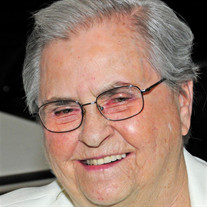 Sister Barbara Brady 85, formerly Sister James Marian, a Sister of Charity of Saint Elizabeth, died January 2, 2019 at The Villa at Florham Park, NJ. Sister Barbara was born in Waterbury, Connecticut, the daughter of James H. and Lillian (Toletti) Brady. She entered the Sisters of Charity on March 6, 1955 and was a member for 63 years. Sister Barbara graduated from the College of Saint Elizabeth, Convent Station, NJ with a B.A. degree in English; from the University of Scranton, Scranton, PA with an M.S. degree in Guidance and Counseling. Sister Barbara served in the education ministry in the State of New Jersey as teacher in St Patrick School, Jersey City from 1957 to 1959; Our Lady of Mt. Carmel School, Tenafly from 1963 to 1969 and as principal from 1969 to 1972; and, St. Augustine School, Union City from 1972 to 1981. From 1981 through 1990 she was a caretaker for her ailing mother in Cleveland, Ohio. During this period she served as receptionist and executive housekeeper in the rectory. at St. John’s Cathedral parish. From 1991-1994, she served as the sacristan of the Cathedral parish. She returned to New Jersey in 1994 to serve as secretary at St. Augustine school, Union City. From 2000 till 2010 Sister Barbara served as a receptionist at St. Elizabeth Convent, Convent Station, NJ, She moved to Saint Anne Villa, Convent Station in 2010 where she resided until her death. Her desire to stay in contact with family and friends is evidenced by her skill of writing long, fun filled letters and cards for every occasion kept her very much connected to those at a distance from NJ or Ohio. Her sense of humor and love of the Peanuts character Snoopy are legendary among her beloved nieces, nephews and friends. Barbara was predeceased by her parents; her aunt, Sister Anita James Brady, SC, her cousin, Anne Virginie Grimes, SC; and her uncle, Rev. John Brady. Sister Barbara is survived by the Sisters of Charity; her brother John and his wife, Margaret Mary; her four treasured nieces Karen J. Kranyak, Julie A. Blogna, Eileen E. Grant, and Maggie Brady. She also has many grandnieces, grandnephews, and one great grandnephew. In lieu of flowers, contributions to the Sisters of Charity Development Fund, P.O. Box 476, Convent Station, NJ 07961-0476 would be greatly appreciated.

The family of SISTER BARBARA BRADY created this Life Tributes page to make it easy to share your memories.

Send flowers to the BRADY family.