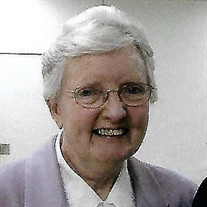 Sister Elizabeth Cahill, (formerly Sister Elizabeth Michael), a Sister of Charity of Saint Elizabeth, passed away Sunday, April 23, 2017 at St. Vincent's Nursing Home in Cedar Grove following a brief illness. She was 81. Sister Elizabeth was born in Weehawken, New Jersey, the daughter of Michael and Mary (Carroll) Cahill. She entered the Sisters of Charity on August 20, 1959 and was a member for 57 years. Sister Elizabeth graduated from the Academy of Sacred Heart, Hoboken and the friendships she formed there were important to her throughout her life. She then graduated from Jersey City State College, Jersey City with a B.S. degree in Primary Education & Kindergarten, and an M.A. degree in Special Education. She graduated from Immaculate Conception Seminary, Darlington with an M.A. degree in Theology. Sister Elizabeth was an Educator and Pastoral Minister throughout her life and touched many lives. She served as a teacher at the Academy of Saint Elizabeth, Convent Station; St. Thomas School, Bloomfield, and Our Lady of the Blessed Sacrament School, East Orange. She was Parish Director of Religious Education at both Saint Thomas Parish, Bloomfield and Our Lady of Mount Carmel Parish, Ridgewood. She was Associate Director for Catechist Formation for the Archdiocese of Newark and Pastoral Associate in Immaculate Heart of Mary Parish, Scotch Plains. Sister Elizabeth served as Councilor and Treasurer for the Sisters of Charity of Saint Elizabeth, Convent Station. Most recently she served in Our Lady Queen of Peace Parish, Maywood as the Pastoral Associate for the homebound and the sick. She is survived by the Sisters of Charity, two brothers, Michael J. (Mildred) Cahill and Matthew (Gloria) Cahill, her sister, Mary Patricia Wagner and two nephews, Joseph (Joyce) Wagner and Edward Wagner. She is also survived by her close cousins, Carol O’Reardon and Joseph Carroll. In lieu of flowers, contributions to the Sisters of Charity Development Fund, P.O. Box 476, Convent Station, NJ 07961-0476 would be greatly appreciated.

The family of SISTER ELIZABETH CAHILL created this Life Tributes page to make it easy to share your memories.

Send flowers to the CAHILL family.