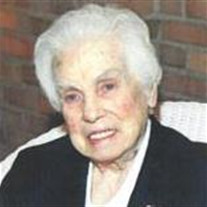 Sister Elizabeth Harnett, (formerly Sister Bernadette Maria), a Sister of Charity of Saint Elizabeth, died Monday, August 13, 2018 at Morristown Medical Center, Morristown, NJ at the age of 98. Sister Elizabeth was born in Roxbury, Massachusetts, the daughter of John and Mary (Stack) Harnett. She entered the Sisters of Charity on September 8, 1936 and was a member for 81 years. Sister Elizabeth graduated from the College of St. Elizabeth, Convent Station, NJ with a B.S. in education and from Seton Hall University, South Orange, N.J. with a M.A. in special education. She was an educator in the states of New Jersey and Massachusetts. She served as an elementary school teacher in St. Mary, Jersey City; St. Aloysius, Newark; St. James, Newark; St. Joseph, Newark; St. Joseph School for the Blind, Jersey City; St. John School, Roxbury, MA and Blessed Sacrament, Jamaica Plain, MA. She applied her degree in special education in her position as an instructor and House Mother in the Learning Center for the Blind, Watertown, MA. After retiring from teaching Sister Elizabeth served as a pastoral visitor in Lemuel Shattuck Hospital, Jamaica Plain, MA. and at Riley House, Hyde Park, MA where she was also a resident until she retired to St. Anne Villa, Convent Station, NJ in 2009. She loved being a Sister of Charity and all who knew with her speak of her kindness, gentle manner and beautiful smile. She loved her students and dedicated herself to helping them grow academically and as children loved by God. Her quiet, steady manner made her approachable and effective in her interactions with her young students and with the senior citizens with who she ministered in her later years. Sister Elizabeth was predeceased by her parents; sisters Mary O’Keefe (John), Helen Hill (Roy); Rita O’Brien; brothers John Harnett (Jean); Nephews Robert Hill and Donald O’Keefe. Sister Elizabeth is survived by the Sisters of Charity and good friend Sister Mary Pauline Hogan; brother-in-law Richard O’Broem; nieces Bonnie Prendergast, Maureen Hill, Teri Leary, Rita O’Brien, Edith Henry; nephews Richard Hill, Richard O’Brien, Jr., John O’Brien, Tom O’Brien, James O’Brien and Robert O’Brien; and many grandnieces and grandnephews. In lieu of flowers, contributions to the Sisters of Charity Development Fund, P.O. Box 476, Convent Station, NJ 07961-0476 would be greatly appreciated.

The family of SISTER ELIZABETH HARNETT created this Life Tributes page to make it easy to share your memories.

Send flowers to the HARNETT family.