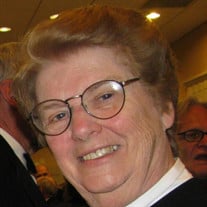 Sister Francis (Rita) Raftery, a Sister of Charity of Saint Elizabeth, died Saturday, May 2, 2020 at Saint Joseph’s Hospital, Wayne, NJ. Sister Francis was born in Orange and grew up in Kearny, New Jersey, the daughter of Francis J. and Margaret (Morris) Raftery. She entered the Sisters of Charity on August 20, 1957 and was a member for 62 years. Sister Francis graduated from Jersey City State College, Jersey City, New Jersey with a B.S. degree in Education; from The Catholic University of America, Washington DC with an M.A. degree in Guidance & Counseling and from New York University, New York, NY with a Ph.D. degree in Early Childhood & Elementary Education. She served as a teacher at the Academy of St. Elizabeth, Convent Station and at St. Thomas the Apostle School, Bloomfield in her early years. For 22 years, Sister Francis was a member of the faculty of the College of Saint Elizabeth serving during that time as Chair of the Education Department. She served as Assistant Provincial (1987-1995) and then as Provincial (1995-1997) for the Western Province of the Sisters of Charity. In 1997, Sister Francis was appointed as the President of the College of Saint Elizabeth serving in that role for 16 years. During her tenure as President, Sister Francis oversaw the construction of Annunciation Hall, the refurbishing of Santa Rita Hall as the Administration Building for the College, and was responsible for the development of the first doctoral program in Educational Leadership Sister Francis’ service continued after she retired as President of the College of Saint Elizabeth. As Coordinator of Patient Relations at St. Joseph’s University Medical Center in Paterson, NJ, a position she held for 7 years, Sr. Francis demonstrated her warmth and compassion to patients and their families’ as well as the staff of the Medical Center. She received many awards over the years. The College of Saint Elizabeth bestowed on her its prestigious Seton Award in 1991 and she was awarded an Honorary Doctor of Humane Letters from Seton Hall University in 2004. In 2011, the New Jersey Commission on Holocaust Education honored Sister Francis with the Sister Rose Thering Award, given for her support of educational and community programs and activities that combat bias, bigotry, and intolerance. She was a well-known keynoter and presenter at many national and diocesan gatherings throughout the United States. She was a born educator and was deeply loved by the students who experienced her as a Professor and as a mentor. Honoring her Irish heritage, Sister Francis was the Grand Marshall of the St. Patrick’s Day Parade in Harrison. She is survived by the Sisters of Charity; her brother Bill Raftery and his wife Joan; her sister-in-law Bridget Raftery; nieces Christi Raftery-Wood (Nick), Kelli Raftery; Suzi Raftery-Herbst (Scott); nephews Brian Raftery (Jean), Kevin, and Billy Raftery, Jr.; and 10 grand-nieces and nephews. She is also survived by her cousin Vincent Doherty (Millie). She is predeceased by her brother Francis P. Raftery and her parents Margaret and Francis. In lieu of flowers, contributions to the Sisters of Charity Development Fund, P.O. Box 476, Convent Station, NJ 07961-0476 would be greatly appreciated. IN THE INTEREST OF PUBLIC HEALTH, ALL SERVICES FOR SISTER FRANCIS, AND INTERMENT AT HOLY FAMILY CEMETERY, CONVENT STATION WILL BE PRIVATE. A PUBLIC MEMORIAL MASS AND CELEBRATION OF LIFE WILL BE SCHEDULED IN THE FUTURE. PLEASE KEEP THE SISTERS OF CHARITY AND THE FAMILY IN YOUR PRAYERS AT THIS VERY DIFFICULT TIME.

Sister Francis (Rita) Raftery, a Sister of Charity of Saint Elizabeth, died Saturday, May 2, 2020 at Saint Joseph&#8217;s Hospital, Wayne, NJ. Sister Francis was born in Orange and grew up in Kearny, New Jersey, the daughter of Francis J. and... View Obituary & Service Information

The family of SISTER FRANCIS RAFTERY created this Life Tributes page to make it easy to share your memories.

Send flowers to the RAFTERY family.