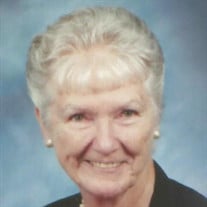 Sister Georgianna Mary Berry, 95, a Sister of Charity of Saint Elizabeth, died Wednesday, September 27, 2017. Sister Georgianna was born in Roxbury, Massachusetts, on September 7, 1922, one of eleven children born to Lawrence and Abbie (MacNeil) Berry. She entered the Sisters of Charity on September 8, 1939, and was a member for 78 years. After graduating from the College of Saint Elizabeth, Convent Station, NJ with a B.S. Degree in Education, Sister Georgianna attended Boston College, Chestnut Hill, Massachusetts and graduated with an M.Ed. Degree in Education. Sister Georgianna was engaged in the education ministry of the Sisters of Charity as a teacher in New Jersey: St. Cecilia School, Kearny, and St. Anastasia School, Teaneck; in Massachusetts: Saint Mary School, Salem; Saint Joseph School, Roxbury; Saint John School, Roxbury; and Saint Ann School, Wollston; in the US Virgin Islands, Saint Peter and Paul School. For the last sixteen years of Sister’s school ministry, she served as Principal of Saint Ann School, Wollaston, MA. Her expertise as school Administrator was recognized and lauded by Saint Ann Parish, the town of Wallaston and the state of Massachusetts. She gave 51 years of professional excellence to the ministry of education. After a sabbatical year at Saint Stephen Priory in Massachusetts, Sister Georgianna relocated to Florida where she immediately became a volunteer-minister in Saint Frances Cabrini Parish, Manatee, Holy Cross Parish, Palmetto and at the Catholic Center, Venice. In the spirit of a true Sister of Charity, Sister Georgianna became a care giver and companion to many serving all with dignity and respect. She is survived by the Sisters of Charity, nieces and nephews, grandnieces and grandnephews and great-grandnieces and great-grandnephews. In lieu of flowers, contributions to the Sisters of Charity Development Fund, P. O. Box 476 Convent Station, NJ 07961-0476 would be greatly appreciated.

The family of SISTER GEORGIANNA MARY BERRY created this Life Tributes page to make it easy to share your memories.

Sister Georgianna Mary Berry, 95, a Sister of Charity of Saint...

Send flowers to the BERRY family.