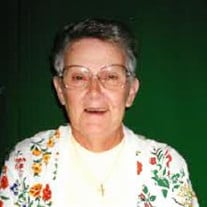 Sister Jean Kolb, 90, formerly Sister Rose de Lima, a Sister of Charity of Saint Elizabeth, died Friday, September 7, 2018 at The Villa at Florham Park, Florham Park, N.J. Sister Jean was born in Cambridge, Massachusetts, the daughter of John and Carolyn (Buckely) Kolb. She entered the Sisters of Charity on March 25, 1946 and was a member for 72 years. She graduated from the College of Saint Elizabeth, Convent Station, N.J., with a B.S. in elementary education. Through the ministry of education, Sister Jean Kolb served as Principal, Teacher, Librarian and Receptionist in several elementary and secondary schools in New Jersey, Connecticut and Massachusetts. Sister Jean was a very dedicated educator. She took great interest in the academic success of her students and very especially in their growth as kind, compassionate people. While actively involved in ministry, Sister Jean lovingly attended to the care of her younger sister Mary Elizabeth Kolb. In 1998, Sister Jean retired to Mt. St. Andrew Villa, Paramus. In 2004 she moved to St. Anne Villa at Florham Park where she resided till her death. She is predeceased by her parents and her sisters Mary Elizabeth Kolb and Carolyn Scanlon. She is survived by her cousins Ann Wallace and April Taylor. In lieu of flowers, contributions to the Sisters of Charity Development Fund, P.O. Box 476, Convent Station, N.J. 07961-0476 would be greatly appreciated

The family of SISTER JEAN KOLB created this Life Tributes page to make it easy to share your memories.

Send flowers to the KOLB family.