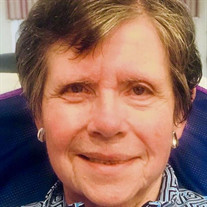 Sister Joan Carroll Granville, SC, who dedicated her life to improving health care, providing administrative expertise and pastoral guidance in both large urban hospitals and in underserved rural settings, died peacefully on May 22, 2018 in the company of her family and community at her home in Morristown, N.J. after a long illness. She was 74. Born in New York City, Joan grew up in Convent Station, N.J. She attended St. Vincent Martyr School and Bayley-Ellard Regional High School, both in Madison, N.J., and both staffed by the Sisters of Charity of Saint Elizabeth with whom she would eventually realize a vocation focused on health care. Joan earned a B.S. in business administration from the College of Saint Elizabeth, and an M.A. in health care administration at St. Louis University. During her ministry, Joan served as an administrator at a number of hospitals, most recently at the Hospital of Saint Raphael in New Haven, Conn. (now Yale New Haven Hospital). When she retired from Saint Raphael’s, she had served as vice president for mission services and as president of the hospital’s foundation. Additionally, she served as a member of several hospital boards and participated in numerous service organizations in the New Haven area. A valued member of Saint Raphael’s leadership team, she was particularly noted for her focus on disadvantaged populations. Early in her career, Joan’s concern for populations with little access to medical attention or health education led her to envision alternative strategies. To realize her vision, she secured funding for Professional Health Resource Center, Inc., a health care delivery project serving residents of seven counties in northwest Georgia. Through a range of initiatives for the community, the Center delivered medical and health education across the region, using a medical van and a portable classroom for programming at shopping malls and community centers. Joan is survived by the Sisters of Charity and by her siblings and their spouses: Beatrice and Paul Jacobson of Davenport, Iowa; Catherine and Ray Schmaus of Natrona Heights, Pennsylvania; Kevin and Julie Granville of Sussex, New Jersey; and Elizabeth Young of Glenside, Pennsylvania. A source of great joy for Joan were her nieces and nephews: Carolyn Jacobson, Bess Jacobson, William Christopher Granville, Iain Granville, Matthew Fox, Bo Fox, Nora Granville, Jane Granville, Peter Granville, David Young, Sarah Drake, Alice Edwards, Kerry Sherk; as well as grandnephews Peter Simpson, William L. Granville, Charles Granville, and grandniece Lucy Drake. Joan’s parents, William H. Granville and Beatrice Link Granville, and another brother, William C. Granville, have predeceased her. Also surviving her are many dear friends, including Lucy Sirico, who faithfully assisted Joan during her later years in Connecticut; Theresa Moore Kluck, whose visits always lifted Joan’s spirits; and Patricia Codey, SC, Esq., who provided Joan with loving care and attention in her final illness. Joan enjoyed music, sailing, and beaches along the Atlantic coast. Recalling the brightness of her smile and the sparkle of her blue eyes will light the way for those who loved her. For more than 50 years, Joan was a member a vibrant religious community, the Sisters of Charity of Saint Elizabeth, a congregation that inspired her—and was, in turn, inspired by her. Especially in her last illness, the community’s compassion and support echoed Joan’s belief in the special dignity of service and in love for others that transcends “time and change and mortal life and death.” Joan’s wake will be held on Friday, May 25, 2018, from 2p.m. to 5:30p.m. at Holy Family Chapel, Convent Station, N.J. followed by liturgy at 6p.m. Interment will be in Holy Family Cemetery, Convent Station, N.J. immediately following the liturgy. Contributions to the Sisters of Charity Development Fund, P.O. Box 476, Convent Station, NJ 07961-0476, would be greatly appreciated in lieu of flowers.

The family of SISTER JOAN GRANVILLE created this Life Tributes page to make it easy to share your memories.

Sister Joan Carroll Granville, SC, who dedicated her life to...

Send flowers to the GRANVILLE family.