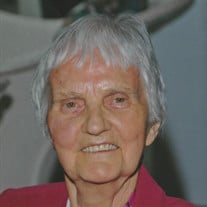 Sister Marian Irene McMullen, 93, a Sister of Charity of Saint Elizabeth, died Monday, February 6, 2017 at The Villa at Florham Park, Florham Park, NJ. Sister Marian Irene was born in Medford, Massachusetts, the daughter of Charles Joseph and Catherine (Doherty) McMullen. She entered the Sisters of Charity on October 2, 1948 and was a member for 68 years. Sister Marian Irene graduated from Emmanuel College, Massachusetts with a B.A. degree in English, from Fordham University, Bronx, New York with a M.A. degree in French and from Rutgers University, New Brunswick with a MSW degree in Social Work. Sister Marian Irene served as an Educator and as a Family Therapist in the States of New Jersey and Massachusetts. She served as a teacher at St. Peter High School, New Brunswick; Blessed Sacrament High School, Jamaica Plains, MA; and at the Academy of St. Aloysius, Jersey City as teacher and Guidance Counselor. She was a Family Therapist at Union City Youth Service Bureau, Linden. She was a volunteer at Catherine Mary McHale Center, Newton, MA and at Xavier Center, Convent Station, NJ. Sister Marian Irene was a Spiritual Director at St. Anne Parish, Readville, MA and retired to the Convent of Saint Elizabeth, Convent Station in 2011. She retired to the Villa in 2012 where she resided until her death. She is survived by the Sisters of Charity; many nieces, nephews, grandnieces and grandnephews. In lieu of flowers, contributions to the Sisters of Charity Development Fund, P.O. Box 476, Convent Station, NJ 07961-0476 would be greatly appreciated.

The family of SISTER MARIAN IRENE MCMULLEN created this Life Tributes page to make it easy to share your memories.

Sister Marian Irene McMullen, 93, a Sister of Charity of Saint...

Send flowers to the MCMULLEN family.