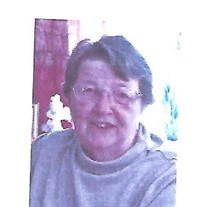 Sister Mary Alberta Keuhlen, 90, a Sister of Charity of Saint Elizabeth, died February 2, 2018 at Morristown Medical Center, Morristown, NJ. Sister Mary Alberta was born in Hillside, NJ, the daughter of Albert and Marie (Oliger) Keuhlen. She entered the Sisters of Charity on March 25, 1947 and was a member for 70 years. Sister Mary Alberta graduated from the College of Saint Elizabeth, Convent Station, NJ with a B.S. degree in Elementary Education and from Boston College, Chestnut Hill, Massachusetts with a M.A. degree in Mathematics. Sister Mary Alberta was an outstanding educator on both the elementary and secondary levels. She served as an elementary school teacher at Our Lady of Mount Carmel, Tenafly; Marylawn of the Oranges, South Orange; St. Philip School, Saddle Brook; St. Thomas School, Waterbury, CT; St. Catharine School, Glen Rock. She taught Mathematics at the following high schools St. Aloysius, Jersey City; St. Mary High School, and the Academy of St. Aloysius. She served as principal of St. Mary High School, Jersey City. As an educator, Sister Alberta exemplified all the qualities one could hope for in a classroom teacher. She was patient yet demanding, a disciplinarian who took time to listen to her students, and a cheering, supportive presence at school activities. After she transitioned from education, Sister Alberta became assistant director at Xavier Center, Convent Station, NJ where she shared her diverse skills with the many groups who came for prayer, retreat or conferences. When Xavier Center closed, Sister Alberta offered her skills as a library assistant at the College of Saint Elizabeth. Never one to just stand by when there was a need, Sister Alberta volunteered in the Office of Financial Services as assistant for special projects for the Sisters of Charity at Convent Station. When her health and stamina waned she moved to Assisted Living at the Villa in 2009, but continued her work with financial services until 2011. Sister Alberta was predeceased by her parents, her brothers Albert and Bernard. She is survived by the Sisters of Charity; a sister, Mary Ellen Egan of Philadelphia, PA; nieces, nephews, grandnieces and grandnephews; and, good friend Ann Marie Civinskas. In lieu of flowers, contributions to the Sisters of Charity Development Fund, P.O. Box 476, Convent Station, NJ 07961-0476 would be greatly appreciated.

The family of SISTER MARY ALBERTA KEUHLEN created this Life Tributes page to make it easy to share your memories.

Sister Mary Alberta Keuhlen, 90, a Sister of Charity of Saint...

Send flowers to the KEUHLEN family.