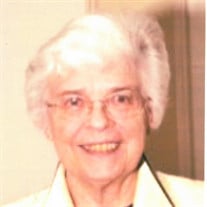 Sister Mary Louise Moran, S.C., 83, passed away on Saturday, August 25th, 2018 in Cedar Grove, New Jersey. She was born in Dunmore, PA and grew up in West Orange, NJ. She was a Sister of Charity of Saint Elizabeth in Convent Station, NJ. Sister Mary Louise devoted her life to the Lord and to the ministries of education and healthcare. Raised in an Irish Catholic family that prized education and learning, she earned her bachelor’s degree from The College of Saint Elizabeth, her Masters in Modern European History from The Catholic University of America, and her Doctorate in Church Leadership from Fordham University. She taught history, English, and religion at Bayley-Ellard High School, becoming head of the history department. She loved each encounter with her high school students, listening, learning, and sharing knowledge. She was promoted to Principal of Bayley-Ellard High School, and was a student favorite as evidenced by the appreciative letters she received from her students over the years. As Assistant Superintendent of Schools and Government Affairs Coordinator for the Diocese of Trenton, Sister Mary Louise participated in the reorganization of the Trenton and Metuchen Dioceses. She was appointed Superintendent of Catholic Education for the Diocese of Trenton and had a leadership role in merging the schools and the religious education offices into the Office of Catholic Education. In later years, Sister Mary Louise transitioned to a healthcare ministry. Good Samaritan Hospital in Suffern, NY appointed Sister Mary Louise to the position of Mission Effectiveness Coordinator. Her leadership training and teaching experience helped to ensure that the hospital’s mission and values were effectively integrated into patient services. She also served as Senior Vice President for Sponsorship for the Bon Secours Charity Health System. Over the years, Sister Mary Louise participated in many boards and committees including Sisters of Charity congressional and provincial assemblies and became a provincial counselor and an assistant provincial. She also assumed a leadership role on many school, hospital and ethics committees, and served as a trustee of the College of Saint Elizabeth, the Coalition of Businesses and Schools, The Sister Georgine Learning Center of Trenton, Samaritan Health Care and Samaritan Adult Residence. She was president of the Good Samaritan Hospital Foundation and received the Good Samaritan Regional Medical Center Medal of Honor Award in 2013. She was a feminist, supporting women locally and around the world through prayer, education, and donations. She was devoted to researching and chronicling the life of Sister Miriam Teresa and wrote articles about her for Sisters of Charity publications. She enjoyed travel, including a mission trip to Bolivia and a recent trip to Rome to hear the Pope speak. She especially loved visiting Maris Stella in Harvey Cedars with her twin sister Martha, whom she adored. She had a dry sense of humor and just the right story at the ready. Conversations with Sister Mary Louise were an uplifting mix of spirituality and analysis of current events and good reads. She was predeceased by her mother Cecelia L. (Swift) Moran, her father Robert P. Moran, brothers John P. Moran and Robert E. Moran, sister Martha H. Moran, sister-in-laws Jewel G. (Golden) Moran and Mary Ann (McCluskey) Moran and niece Mary Ellen Moran. She is survived by the Sisters of Charity of Saint Elizabeth, nieces Rebecca Angelone, Elizabeth Strauss, Victoria Curran, Kathleen Graycochea, and Maureen Moran, nephews Christopher Moran, Michael Moran, Dennis Moran, Daniel Moran, and Thomas Moran, and many great and grand nieces and nephews. In lieu of flowers, donations may be made to Sisters of Charity of St. Elizabeth Development Fund, PO Box 476, Convent Station, NJ 07961-0476.

Sister Mary Louise Moran, S.C., 83, passed away on Saturday, August 25th, 2018 in Cedar Grove, New Jersey. She was born in Dunmore, PA and grew up in West Orange, NJ. She was a Sister of Charity of Saint Elizabeth in Convent Station, NJ.... View Obituary & Service Information

The family of SISTER MARY LOUISE MORAN created this Life Tributes page to make it easy to share your memories.

Send flowers to the MORAN family.