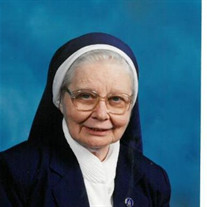 Sister Mary George Senderak 94, a Sister of Charity of Saint Elizabeth, died Tuesday, January 29, 2019 at The Villa at Florham Park. Sister Mary George Senderak was born in Bridgeport, Connecticut, the daughter of George and Anna (Smetana) Senderak. She entered the Sisters of Charity on April 2, 1949 and was a member for 69 years. After the completion of her postulancy and novitiate, Sister Mary George worked as an elementary school teacher at St. Rose of Lima School in Newark and at St. Stephen School, Kearny, while completing her college work. She received her Bachelor of Science degree with a major in Business Administration from the College of Saint Elizabeth, Convent Station, NJ. For two years after receiving her degree, Sister Mary George taught at Bayley-Ellard High School in Madison. In 1961 she returned to her alma mater to work as an Administrative Assistant to the Dean of Studies, a position she held for six years. She studied summers and received a M.B.A. degree from the University of Notre Dame in 1964. From 1970-82 Sister Mary George served as the College of Saint Elizabeth Registrar. She received an Ed.D. in Higher Education in 1971 from Teachers College, Columbia University, New York, NY. She then served as Director of Institutional Research at the College of Saint Elizabeth and was a member of the President’s Council as well as a recipient of the Kelligar Medal in 1989. She was a member of several Northern Province committees and Assemblies and served a term on the Board of Trustees of Saint Raphael Hospital. She also taught religious education at Assumption Parish in Morristown and served as Eucharistic Minister at Morristown Memorial Hospital. She was an assistant in the Archives. Sister Mary George was an advocate for issues of World Hunger and received the Mother Xavier award for Social Justice in recognition of her tireless efforts. She resided in Saint Anne Villa until her death. She is survived by the Sisters of Charity; her sisters, Theresa Noccioli, Bridgeport, CT; Irene Bohn, Ansonia, CT; Sandy (William) George, Weston, CT; Dorothy Veronesi, Fairfield, CT; brother, Bernard (Annette) Senderak, Murrells Inlet, SC. She is also survived by 70 nieces, nephews, grand-nieces and grand-nephews. In lieu of flowers, contributions to the Sisters of Charity Development Fund, P.O. Box 476, Convent Station, NJ 07961-0476 would be greatly appreciated.

The family of SISTER MARY GEORGE SENDERAK created this Life Tributes page to make it easy to share your memories.

Sister Mary George Senderak 94, a Sister of Charity of Saint...

Send flowers to the SENDERAK family.