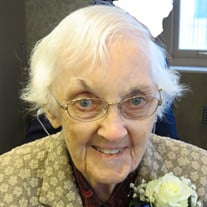 Sister Rita Toomey 94, formerly Sister Mary Philomena, a Sister of Charity of Saint Elizabeth, died Thursday, January 17, 2019 at The Villa at Florham Park, NJ. Sister Rita Toomey was born in Jersey City, NJ, the daughter of James and Mary (Latimer) Toomey. She entered the Sisters of Charity on September 6th, 1955 and was a member for 63 years. Prior to her entrance into the Sisters of Charity, Sister Rita worked in the business world for almost ten years. She brought this experience and knowledge with her to the work of the congregation. She graduated from the College of St. Elizabeth, Convent Station, NJ with a B.A. in economics and from Seton Hall University, South Orange, NJ with a M.B.A. in accounting. Sister Rita was an educator in New Jersey. She served as a teacher at St. Mary High School, Jersey City and Holy Cross Commercial High School, Harrison. From 1961through 1971 she was at St. Mary’s Hospital, Passaic where she worked in the finance office. In 1971 she was appointed to the position of General Treasurer of the Sisters of Charity. In 1975, she returned to St. Mary’s Hospital where she became the Supervisor of Accounts Payable and Payroll Departments, and was assigned to a variety of different roles. Sister Rita transitioned to the pastoral care department of the hospital in 1991. Her gentle manner, ability to listen, and wonderful caring manner made her a gift to patients and their families. She made the change from accounting for funds to aiding people in finding peace willingly and capably. In 2008, declining health necessitated her move to Saint Anne Villa, Convent Station. She will be missed by the next generation, her faithful visitors that included, Katherine Beck, Stephanie and Patrick Madden and Alexia Craig as well as the Villa Walsh girls who shared her crossword passion. She was pre-deceased by her parents and seven siblings; Alice, Jim, Lucy, Marge, Tom, Mary and Charlie. She is survived by the Sisters of Charity; and by her numerous nieces and nephews. In lieu of flowers, contributions to the Sisters of Charity Development Fund, P.O. Box 476, Convent Station, NJ 07961-0476 would be greatly appreciated.

The family of SISTER RITA TOOMEY created this Life Tributes page to make it easy to share your memories.

Send flowers to the TOOMEY family.