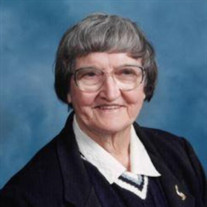 Sister Theodora Furniss, 96, formerly Sister Margaret Ellen, a Sister of Charity of Saint Elizabeth, died July 29, 2020 at St. Joseph’s Health and Rehabilitation Center, Cedar Grove, NJ after a brief illness. Sister Theo was born in Jersey City, New Jersey, the daughter of Thomas and Florence (Beatty) Furniss. She entered the Sisters of Charity on September 8, 1943 and was a member for 77 years. Sister Theo graduated from the College of Saint Elizabeth, Convent Station, New Jersey with a B.A. Degree in Mathematics. She received grants from the National Science Foundation to study mathematics at Notre Dame University and St. Peter’s College, Jersey City. Sister Theo served in the ministry of education in the State of New Jersey. Her teaching career began with service at Epiphany School, Cliffside Park and St. Aloysius High School, Jersey City. In 1965 Sister Theo began a 55-year commitment to Mother Seton Regional High School, Clark. She taught Mathematics for more than 30 years and added Behind the Wheel Driver’s Education to her responsibilities in 1977. When Sister Theo completed her formal classroom ministry at Mother Seton, she served as Administrative Assistant. In 2014 Sister Theo began volunteering in the bookstore, where she served as manager. She continued her faithful presence with the students, faculty and families at Mother Seton until her death. Sister Theo generously volunteered for many summers at Maris Stella, Harvey Cedars, NJ. She especially enjoyed driving the lawn mower and preparing meals. Sister Theo was predeceased by her parents and her brothers, Rev. John G. Furniss, SJ, Benedict and Francis. Her sister Faith died as a young child. Sister Theo is survived by the Sisters of Charity; her nieces Florence Furniss and Mary Ann Furniss and a “nephew” ‘Doc’ Blaise Curcio. In lieu of flowers, contributions to the Sisters of Charity Development Fund, P.O. Box 476, Convent Station, NJ 07961-0476 would be greatly appreciated. DUE THE CURRENT SITUATION WITH REGARD TO THE COVID PANDEMIC, THE VISITATION, MASS, AND INTERMENT WILL BE PRIVATE. PLEASE KEEP THE SISTERS OF CHARITY AND THE FAMILY IN YOUR PRAYERS AT THIS DIFFICULT TIME.

The family of SISTER THEODORA FURNISS created this Life Tributes page to make it easy to share your memories.

Send flowers to the FURNISS family.