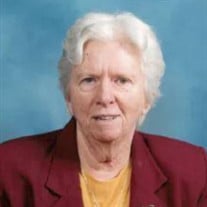 Sister Ursula M. Carr, 92, a Sister of Charity of Saint Elizabeth, died Sunday, September 20, 2020 at the Convent of St. Elizabeth, Convent Station, NJ. Sister Ursula was born in Newark, New Jersey, the daughter of Felix and Margaret (Grant) Carr. She entered the Sisters of Charity on April 2, 1949 and was a member for 71 years. Sister Ursula graduated from the College of Saint Elizabeth, Morristown, New Jersey with a B.A. degree in Mathematics; from the University of Notre Dame, South Bend, Indiana with a M.A. degree in Chemistry and from Fordham University, Bronx, New York with a M.A. degree in Religious Education. Sister Ursula also studied Chemistry through grants from the National Science Foundation at the University of Notre Dame, South Bend, IN, and Rutgers University in NJ. Sister Ursula served in educational and pastoral ministries in New Jersey. She taught at St. Paul’s School, Clifton, St. Peter’s High School, New Brunswick, St. Joseph High School, Paterson, and St. Cecilia High School, Kearny. Sister Ursula served as Director of Religious Education at Notre Dame Parish, North Caldwell and St. Anthony’s Parish, Northvale. She was Pastoral Associate at St. Cyril & Methodius Parish in Boonton and coordinated Pastoral Services for the Sisters of Charity. Despite serious illnesses, Sister Ursula continued to live the mission of the Sisters of Charity in service to God’s people. She moved to Convent Station in 2013 and resided there until her death. Sister Ursula was predeceased by her nephews, Patrick Carr and Christopher Carr. She is survived by the Sisters of Charity, her sister, Mary Ann D’Angelo, her brothers, Patrick J., Philip, and Bernard and his wife Diana, many nieces and nephews and grandnieces and grandnephews. In lieu of flowers, contributions to the Sisters of Charity Development Fund, P.O. Box 476, Convent Station, NJ 07961-0476 would be greatly appreciated.

The family of SISTER URSULA MARIE CARR created this Life Tributes page to make it easy to share your memories.

Send flowers to the CARR family.