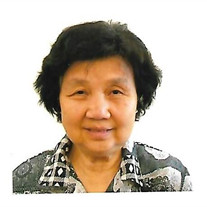 Thanh Thuc Tran passed away Saturday, January 20, 2018 at St. Clare&#8217;s Hospital in Denville. She was 85. Born in 1932 in Baclieu, Republic of South Vietnam, she moved to Saigon in 1950 after her marriage to her beloved husband, Dan Chan... View Obituary & Service Information

The family of THANH THUC TRAN created this Life Tributes page to make it easy to share your memories.

Send flowers to the TRAN family.