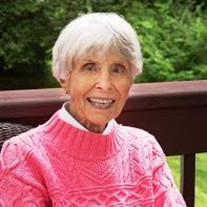 Virginia B. Crane (nee Brasefield) passed away peacefully Tuesday morning, Feb. 20, 2018 at Lantern Hill Retirement Community in New Providence, NJ. She was 87. Born in Ann Arbor, MI, Mrs. Crane grew up in Connecticut, California, Maryland and New Jersey. She attended Red Bank High School and graduated from Mount Holyoke College in 1951. She was a resident of Summit, NJ for 51 years before recently moving to New Providence. Mrs. Crane worked as a computer programmer and in the computer library at Bell Laboratories in Murray Hill, NJ for 20 years before retiring in 1992. She was preceded in death by her first husband Harlan R. Turner, her second husband, Prescott Crane, and her sister, Barbara Dodds. Survivors include her two loving sons, David H. Turner of Union and Richard C. Turner and his wife Louise of New Providence, three grandsons, Matthew, Brendan, and William Turner, and her two nieces, Leslie and Allison. Additionally, she is survived by the children of Prescott Crane; Laurie Johnson, Susan Crane, Steve Crane and his wife Terri, and their families. A private Memorial and Interment Service will be held in the future. In lieu of flowers, the family would be grateful for memorial donations to one's own favorite charity.

The family of VIRGINA B. CRANE created this Life Tributes page to make it easy to share your memories.

Send flowers to the CRANE family.