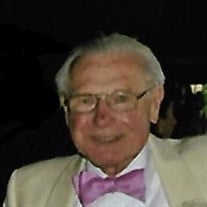 W. George "Wally" Parker passed away on Wednesday, August 9, 2017 at his home in West Caldwell, NJ. Wally was born in Newark, NJ on April 24, 1925 to Leocadia and Paul Plonski. He was a 1942 graduate of East Side High School in Newark. An agricultural major at Penn State University, Wally completed his degree in 1948 through the GI Bill after serving two years in the Navy during World War II. Wally met the love of his life, Eleanor Dunn at a Polish social event. They were married on September 5, 1949, and moved to Bloomfield, NJ. Wally and Ellie were also residents of Glen Ridge, Little Falls, Bay Head and recently West Caldwell. Wally was a successful business man and entrepreneur. Hired as a chemist in 1949 for Cook & Dunn Paint Corporation, he subsequently became President & CEO from 1976 to 1999. He founded and led the Adco Chemical Company and also acquired Thibaut Walker Company. Wally served as a board member and Chairman of the Board of American Savings Bank in Bloomfield, and was instrumental in the acquisition of American Savings Bank by Investors Bank. Wally was a great conversationalist, and a connoisseur of vodka and fine wine. He loved playing golf and bridge, but, was most happy when shucking oysters and clams before summer dinners with family and friends in Bay Head. He is survived by his children Dr. Paul M. Parker, Karen Skoda, Barbara Kalemkerian, daughter-in-law Angela Parker and son-in-law John Kalemkerian. He is also survived by eight grandchildren of whom he was so proud, Matthew, Andrea, Alexis, Eleanor, Greg, Catherine, Douglas and Christopher, two grandson-in-laws Joseph Bonanno and Matthew Materkoski, two granddaughter-in-laws, Tara Parker and Juli Parker, great-grandchildren, Mario Bonanno, Riley Materkoski, Rosalie Bonnano, Ella Materkoski and Nathan Parker. His wife Ellie predeceased him in September 2013. Donations may be made in Wally’s name to the Henry B. Chapman Fund at the Women’s Club of Glen Ridge, 219 Ridgewood Avenue, Glen Ridge, NJ 07028. Private Interment will be at the family plot at Gate of Heaven Cemetery, East Hanover.

W. George "Wally" Parker passed away on Wednesday, August 9, 2017 at his home in West Caldwell, NJ. Wally was born in Newark, NJ on April 24, 1925 to Leocadia and Paul Plonski. He was a 1942 graduate of East Side High School in Newark.... View Obituary & Service Information

The family of W. GEORGE PARKER created this Life Tributes page to make it easy to share your memories.

Send flowers to the PARKER family.